He’s a future engineer. He’s a composer who recently wrote his first commissioned work. Tray Guess is a double major in engineering and music composition at Cornell College. 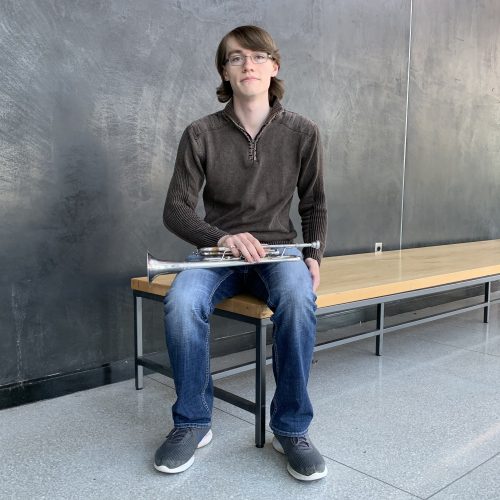 The senior from Lafayette, Colorado, says each major has distinct challenges.

“Engineering classes and homework take up more time, and usually there are also the team-based design projects that require extra effort outside of normal class hours. It’s a major that takes a lot of work to be successful in, and definitely a lot of math,” he says.

Music is just as challenging, but in a different way.

“Instead of time spent in class, much of the major takes place outside of class. For example, I am a composition focus, so I spend hours composing, working with ensembles, and networking outside of class. I also play trumpet, so I am in Jazz, Orchestra, and Concert band. Put lessons on top of that, and the music major becomes busy quickly.”

Another difference? The personal drive to constantly get better is an important factor in the music major. “It can be emotionally draining, spending so much time on music that is personally meaningful. In the long run, however, those hours are worth it, and the payoff of performances is the best part of being a composer,”  says Guess, who hasn’t yet decided which of the two fields he’ll ultimately pursue.

Earlier this year Guess wrote his first commissioned piece, which was performed by  Linn-Mar High School’s Concert Band of 9th and 10th-grade students. He has also written a piece for the Cornell College Symphonic Band and the Iowa new music chamber group the Durward Ensemble.

Given his choice of majors, Guess says time management is the most important thing he’s learned as a student.

“My situation requires very careful decision-making as to what is worth my time. Thankfully, I have been able to be successful in both majors, but without learning time-management skills this would not have been possible.”

His private composition lessons have had the most impact on his music study. In engineering, he cites a Circuits class with Professor of Physics Derin Sherman as most influential. “It opened my eyes to the possibilities of electrical engineering. I found that there was something strangely beautiful with how everything balances out in a loop, and it invigorated an interest in electrical engineering,” he says.

With two distinct fields of interest, Guess is keeping his options open.

“I am seriously considering both fields. If I choose music, I will probably go all the way to get a Ph.D. or D.M.A. and perhaps become a professor. If I could do anything, I would be a joint conductor and composer,” he says. “On the engineering side, I am interested in R&D type work, solving complex problems at the cutting edge of technology. A master’s, at the least, is in my future. I would like to work in the space industry.”

Either way, a promising future awaits.