Tray Guess ’20 has been writing his own music since he was a sophomore in high school.

Now, he watches as a group of students, not much younger than himself, takes on one of his musical creations for an upcoming performance.

Guess has written his first commissioned piece for Linn-Mar High School’s Concert Band of 9th and 10th-grade students, and he got to visit with the class as they learned the music.

“I came into this opportunity through my Cornell composition professor, Dr. Aaron Perrine,” Guess said. “Much of the music he writes is for concert band and he has many connections in the field. Dr. Perrine sent my name to Jennifer Tiede, the school’s director, when she mentioned that the school was looking for commissions. I was contacted by Jennifer and the process began.” 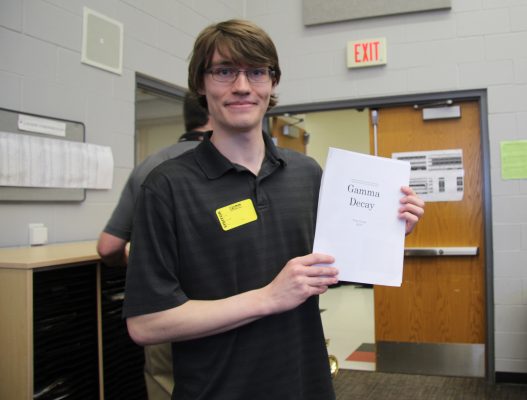 The high-energy piece is called “Gamma Decay” and is about four minutes long. Guess said he wants the students to learn something new as they engage with it. He admits it was a challenge for him to write music at the appropriate level.

“For me, complex and difficult music comes more naturally than simpler, easier music,” Guess said. “My goal with this piece was to use some of the ideas that I enjoy and give them a taste at an easier level. For example, easier band music often has very simple and predictable harmonies. In my piece, I used several chromatic chords – this means that they are chords which aren’t normally heard in a scale. Modern music uses these types of chords extensively, and they allow the piece to have a more unique sound and feeling. Exposure to this will help the players as they improve and play harder music.”

The trumpet player has also written a couple of other pieces for large groups. A piece called “Prophetic Visions” will be performed by Durward Ensemble, a new music chamber group in Iowa, on May 9, at 7:30 p.m. in Coe College’s Sinclair Auditorium. Earlier this year the group put a call out for scores, and Guess’s piece was one of three selected by the professional-level ensemble. Guess also created a piece for the Cornell College Symphonic Band. He says it’s a strange feeling to see and hear the music come to life when groups play his music.

“I spend so much time thinking about it, even when I’m not writing, that I refine this sound so much in my mind to the point where I think it’s perfect,” Guess said. “When I hear it played, the experience is bizarre in the sense that I’m hearing something similar to my mental sound, but not the same. The musicians playing are real people, who all add their own sounds and musicianship. Ultimately, it brings me back to reality–my music that I write down is only half of the equation. It’s nothing but imagination if there isn’t someone to realize it by playing it.”

The Cornell double major in engineering and music has goals of going to graduate school and studying music composition after graduation. He’s looking forward to learning throughout this process and working with the students as they take on this new work.

“The goal with this is to help me learn what works well and what doesn’t,” Guess said. “After all, I’m still soaking up new information about composition constantly. It’s also cool for the players to meet the composer. I really want them to see how anyone can write music. I’m really not much older than they are, and when I was in high school I didn’t quite have the encouragement which would have pushed me. Hopefully, I can help convince them to give composition a try!”

The Linn-Mar band will play “Gamma Decay” at its spring concert on May 16.