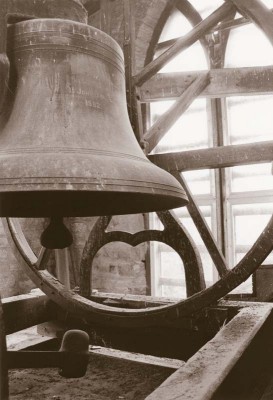 From their installation in 1882 until the 1950s, four bells made by the Meneely Company in New York—2,000, 500, 275, and 110 pounds—tolled the hours from their perch atop the tower of King Chapel. A fifth Meneely bell hung in the cupola of College Hall until 1977, when a crack was discovered. That bell was replaced with the 500-pound bell from King Chapel, and it was destroyed in September 2012 when lightning struck the College Hall cupola. The hourly tones heard on campus now are made by the carillon in King Chapel, which was installed in 1950