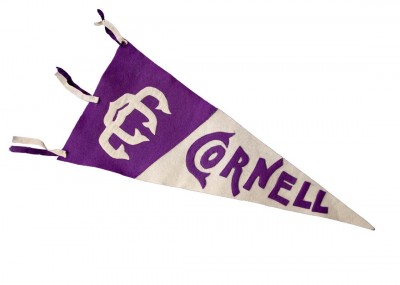 There are a lot of ways to show support for your alma mater, and one of the most visible is a college pennant like this one from the 1920s. The triangular flag, descended from the ways ships once signaled each other, is now a signal of loyalty to Cornell. And the pennant is still going strong—admitted students get a pennant with their acceptance letters, and dozens of alumni have participated in the Purple Pennant Project, taking photos of themselves with a Cornell pennant in places around the world.