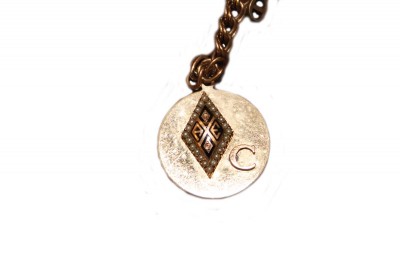 Greek life at Cornell grew out of the literary and secret societies of the 19th and early 20th centuries. Now there are 14 local fraternities and sororities on campus, and about a third of students belong to Greek organizations. In the 1960s Alpha Chi Epsilon (AXE) serenaded women who were “pinned” by a member. This is the AXE pin Doug Kirkpatrick ’65 gave to Joanie Landquist Kirkpatrick ’66 in 1964 to signify that they were “going steady.” They have been married for 46 years.