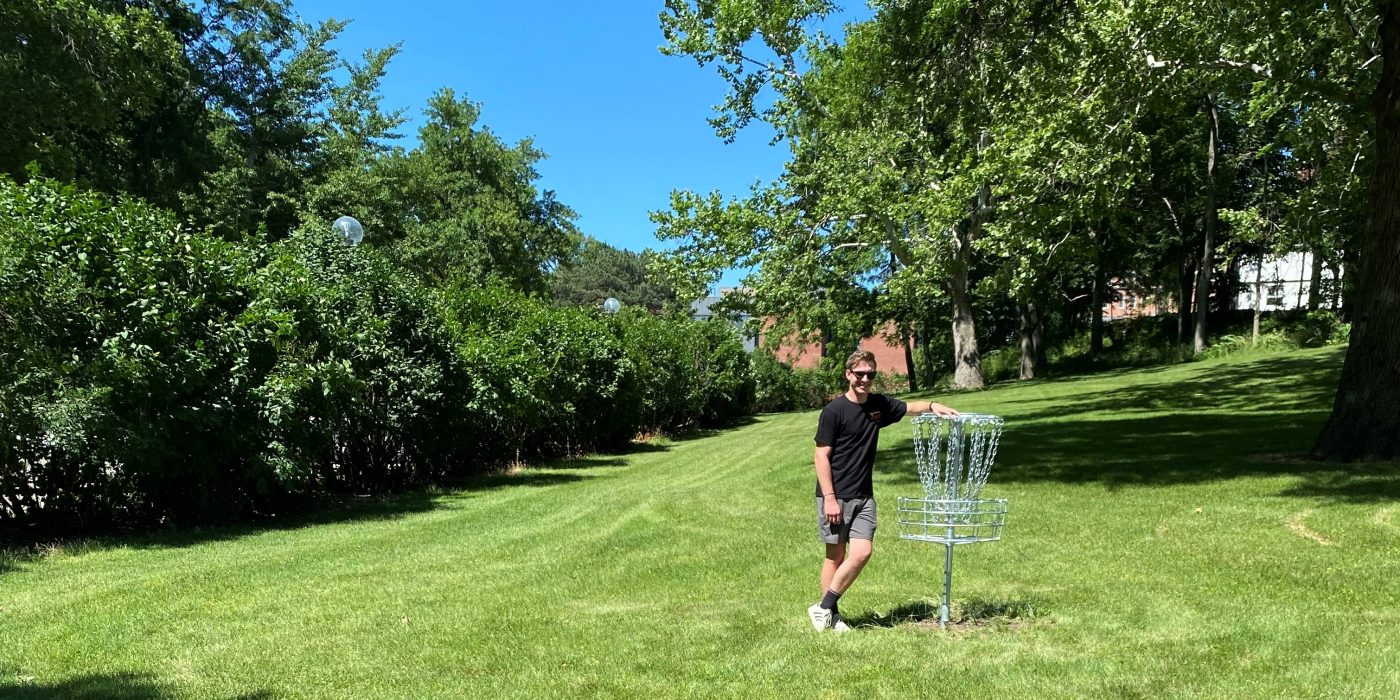 Many Cornell College students enjoy playing a round of disc golf on campus, but when players return from summer break they’ll notice some big changes.

It’s all thanks to a fellow student who saw the potential for an upgrade.

With the help of some campus offices and student organizations, Maxwell Lundt, a biochemistry and molecular biology junior, worked on the upgrades over the past year.

The course, which has been around since 2009, has been a staple of campus life for students and community members for years. The original course went from the front of Thomas Commons all the way to McLennan College Hall, it then went behind Tarr Hall and around Ink Pond.

Lundt, a Colorado native, has been playing disc golf for a while. He actually designed a mini-course for his elementary school in just the fifth grade, so updating the Hilltop disc golf course was the logical next move.

Lundt’s project added five holes to the original nine-hole course and made it a complete 15-hole disc golf course (one hole is played twice). Now he says the course route is much better.

Instead of going across the front of campus, from Thomas Commons to McLennan College Hall, then cutting to behind Tarr Hall, the course now wraps around the back of Russell Science Center and West Science Hall to connect to the holes at Ink Pond. The new course also has a hole next to Allee Chapel that cuts right through the Tri-Hall lawn. This central hole is one of Lundt’s favorites.

“I feel that that’s a great spot because every time a disc makes it into the basket all three halls can hear it, it grabs people’s attention,” he said.

The course layout wasn’t the only thing Lundt changed.

Lundt noticed that the disc golf course itself did not have much information or advertisement before his upgrades. He’s tackling that as well by adding signs near each of the tee pads so anyone who walks up to start playing can see a map of the course as well as the rules of the course. These final touches, which are still in the works, are what Lundt is most excited about.

“We got the signs and just holding them and knowing they’re going to be going up is amazing,” he said.

Lundt didn’t just have the gratification of leaving a mark on Cornell College’s campus, he learned what it takes to get stuff done. There’s a process to follow and that takes time.

“In my head what would happen is I would just ask for money, and I would get the money, then I would do everything and get everything installed, but I’ve kind of learned that’s not really how that works,” he said.

After a year of work, it’s almost finished.

When students arrive in August, Lundt says he’s excited to see everyone playing on the new course and exploring campus in a new way–just as he did in 2020 as a first-year student playing disc golf on the Hilltop.