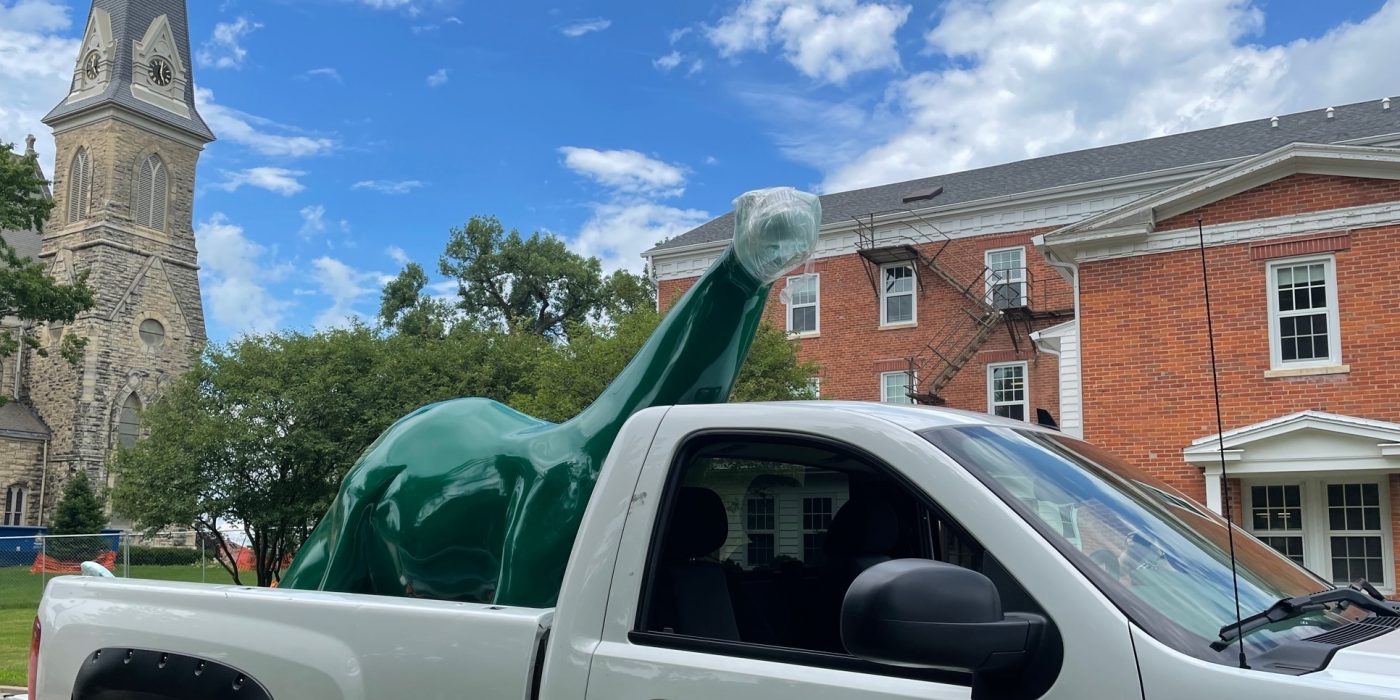 A new resident has moved into Cornell College’s Cole Library ready to greet students when they return in the fall.

But this isn’t your typical staff member or librarian.

This new resident on the third floor of the library is green, about 12 feet long, and about six feet tall. He also hasn’t had many friends in about 150 million years, so he’s ready to meet lots of Cornellians.

You got it. A dinosaur, specifically a Sinclair dinosaur (yes, like the ones you used to see at Sinclair Gas Stations) now lives in the library thanks to a dedicated group of alumni.

“It’s surreal but it’s also random,” said Mandy Landuyt ’99. “The whole thing was so random and was this silliness from the beginning of COVID lockdown. It was something to do and focus on that was fun and exciting and uniting for those of us who wanted to be involved.”

Cornellians from the ’80s and ’90s loved getting silly pictures with the Sinclair dinosaurs around Eastern Iowa during their college years. It’s a tradition that stretched on even after that too. So, when a group of alumni noticed a Facebook post about a gas station removing one of the green dinosaurs, they set out on a mission to try to buy it. In a matter of weeks, they raised thousands of dollars.

That was the beginning of a two-year journey that ended this week. It came with lots of twists and turns.

During this process, they learned that the company and police were looking for the exact dinosaur that they were in line to purchase. After a lot of phone calls, they discovered that they couldn’t legally purchase the dino. But after helping Sinclair locate the dinosaur, Landuyt says the company decided to donate one to the group to thank them for solving the puzzle of their long-lost dino.

“It was just this crazy turn of events that went down all these different paths,” Landuyt said.

Well, now he’s home after he was shipped to Cornell and given a lift by Cornell’s facility team who drove the dinosaur across campus and moved him into the library.

“I don’t think anyone imagined we’d ever be moving a dinosaur into any building,” Facilities Operations Manager Luke Fischer said with a laugh.

Director of Cole Library Greg Cotton says he’s amused to have it, especially because academic libraries can feel “stuffy” at times.

“I’m happy that when we have new students coming to campus their first impression will be – ‘oh yeah, this is the library with the dinosaur.’ I like that vibe that it’s going to give off that we are not stuffy, and we’re fun and approachable,” Cotton said. “I think that right off the bat is going to make new students comfortable coming in and seeking us out for help.”

Alumni who supported this project are excited to visit and take new pictures with the dinosaur and to see the next generation of Cornellians experience some of the fun they had during their time at Cornell. New students like Landuyt’s daughter, who will be a first-year student, can now make new memories.

“She’ll be there and will be able to say, ‘hey, my mom and her friends brought that dinosaur here!’ She knows all about it. It’s extra awesome to think maybe she’ll have as much fun with it,” Landuyt said.

Cornellians and community members are welcome to take pictures with the dinosaur and share them on social media using #Cornellosaurus. Alumni submitted photos with other area Sinclair dinosaurs: