CRISPR is a new technology that’s often in the news and shared among researchers in the world of science. Now Cornell College students are getting an opportunity to explore it firsthand in the lab.

Researchers are using the technology to understand genetics and explore cures for diseases.

“CRISPR is the new gene-editing technique that moved out of the laboratory for basic research and is now being used in medicine,” said Professor of Biology Craig Tepper. “Scientists are able to correct a number of hereditary diseases using CRISPR. By editing DNA in certain types of cells and making corrections, this process corrects the mutation that caused the problem.”

CRISPR, which stands for clustered regularly interspaced short palindromic repeats, has risen in popularity over the past 10 years as scientists explore the use and ethics of the new technology.

“Since it’s a newer technique, I felt that it was important for our students to be exposed to the technology,” Tepper said. “We’ve developed a series of labs, starting with our introductory students, in which we could use CRISPR to genetically engineer E. coli, instead of people or animals. So, our system is developed so that the students not only learn how it works but to actually use it.”

During the lab, students introduced a mutation into the E. coli’s DNA using the new technology. Tepper said it was helpful to do this on Cornell’s One Course At A Time schedule, where students take one class for 18 days, so they could fully immerse themselves in the lab without interruptions. 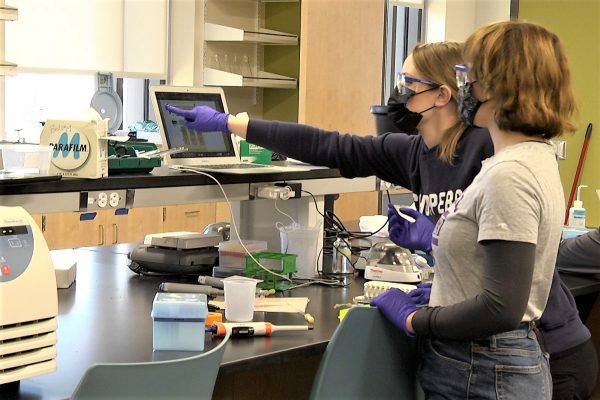 “They could actually see what happens when E. coli’s DNA repair system was inactivated and CRISPR cut the DNA.  This resulted in the death of the bacteria,” Tepper explained. “We also added a DNA donor, which contained a stop codon, into the CRISPR cassette and activated the repair systems. The E. coli incorporated the donor DNA into its DNA. We used a color marker to determine if we altered the gene,  and the students showed they had successfully edited the bacteria.”

Senior Samantha O’Brien took Developmental Biology during Block 4 where she participated in the lab during the first week of the 3 ½ week course.

“We learned that CRISPR was used to treat sickle cell anemia as one of the first human applications,” O’Brien said. “So, it was really interesting to actually go into the lab and see it work. Our two E. coli strains had different color markers, so it was easy to visualize that we were actually altering the gene expression in the E. coli.”

She says CRISPR needs further study but knows there could be far-reaching implications for future health needs for humans and animals. She’s planning on becoming a veterinarian when she graduates from Cornell College, so this lab will directly apply to her future.

Tepper says he’s passionate that his students get a chance to try out this technology because many of them, like O’Brien, will need the skills for their careers. And it’s something they can relate to when they hear about CRISPR advances on the evening news.

“Now they can tell their friends they did CRISPR,” Tepper said with a smile.