Red Cedar Chamber Music will present “Licorice Schtick,” a concert of works by living composers, at 7:30 p.m. Monday, Oct. 18, in Kimmel Theatre on the Cornell College campus. This is the first event of the 2021-22 Cornell Concert Series and is open and free to the public.

Cornell currently requires the use of masks in non-residential buildings, which includes Kimmel. The musicians will observe the Music Department’s protocols for performers.

Among the five living composers with works on the program are two women, Gwyneth Walker (born 1947) and Natalie Hunt (born 1985). Walker is a former faculty member at Oberlin Conservatory and is retired to her hometown in Connecticut. Her work, “A Cup of Rejoicing,” opens the program. Hunt is an exciting young composer living in New Zealand. Jeff Smallman (born 1965) is a versatile Canadian composer. Both he and Hunt have written multi-movement works for clarinet quartet that represent very different styles. 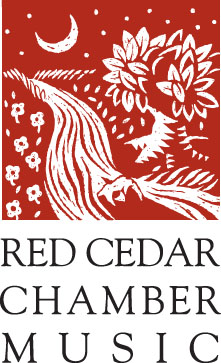 Two Iowa composers have contributed works to the program. Jerry Owen, Red Cedar’s first composer-in-residence, has arranged his 1994 work “Licorice Brittle” for the ensemble. The work was premiered by Christine Bellomy and has tremendous energy and an intricate texture. Michael Kimber, Red Cedar’s current composer-in-residence, has written “Four Chorinhos for Little Brazilian Birds” for the program. Choros is an instrumental Brazilian music genre akin to New Orleans jazz. Each movement is dedicated to an endangered Brazilian songbird. Kimber’s chorinhos are as colorful as the birds that inspired them.

Kim and Bostian have concertized together since 2000. In 2015 they were invited to become the directors and core ensemble of the nonprofit Red Cedar Chamber Music, through which they bring innovative and entertaining concert projects and educational residency programs to broad and diverse audiences.

“Cornell College has hosted Red Cedar Chamber Music many times for concerts since the founding of the ensemble,” said series coordinator Dean of the College Emeritus and Artist Instructor of Clarinet Joe Dieker. “We are pleased to welcome them back for this year’s Music Series that features music by local and regional musicians.”

Bellomy holds positions in several Iowa ensembles, including as principal clarinet in Orchestra Iowa. Oakes is director of the University Iowa String Quartet Residency program and is the former violist of the Maia Quartet.