Cornell Culture: The traditions and rituals that unite us

Cornell Culture: The traditions and rituals that unite us

How does a boulder unite generations of Cornellians? Or tossing toilet paper? And, really, how could a stuffed moose become closely associated with Cornell College?

“Rituals give meaning and collective consciousness,” says Ringer Distinguished Professor of Sociology Tori Barnes-Brus ’97. “Traditions reinforce norms and give us something to celebrate. It marks who is in. And it shows us who we are.”

Emile Durkheim, one of the founding thinkers in sociology, wrote that collective consciousness is about building solidarity, and rituals are a part of that, Barnes-Brus says. “They can be things that are celebrated, or the everyday bubbling up. The way we go to class from 9 to 11 and 1 to 3, that’s kind of a mundane thing. but it’s a ritual. It gives us something to look forward to, and it gets you to a sacred ritual: graduation.”

Being part of a culture rich in tradition and ritual, whether serious or whimsical, reinforces the Cornell identity and community.

Traditions such as freshman beanies thankfully have been lost to time. Others, like Pal Day, are gone but fondly remembered by graduates of a certain era. New traditions—the traveling Bremner Cup trophy with Coe is one example—are gaining traction.

These are the stories behind current traditions that unite us as Cornellians. 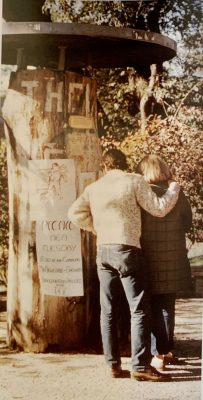 The college established its first kiosk in 1966 when a massive oak stump taken from the site of the Thomas Commons was placed east of the building, topped with a big round cap, and thereafter plastered with posters and lettering. It was immortalized soon after when its likeness was embossed in silver on the cover of the 1968 Royal Purple. During the presidency of Samuel Stumpf (1967 to 1973), some called it The Stumpf.

That kiosk was removed during the 2002 expansion of the Marie Fletcher Carter Pedestrian Mall and the current trio of kiosks was added.

Special Assistant to the President John Harp recalls working with the architect on that project, which became three kiosks instead of one: “They believed in the ‘rule of three,’ no other reason.” 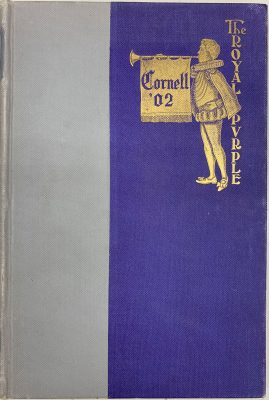 The very first Royal Purple yearbook came out in 1901 and, as the name implies, proclaimed the school color “Royal Purple,” displacing the original school colors of silver, gray, and old gold. The name and the purple cover created a tradition that outlived even the yearbook itself, which ceased publication in 2015. Never could those turn-of-the-last-century editors have imagined the sheer amount of purple clothing, purple gear, purple swag, and even purple hair they would inspire.

The first Royal Purple, which gave Cornell its school colors, was published in 1901 but dated 1902 to honor its editors, the junior class of 1902. (This confusing naming policy continued until 1949; there’s a tradition we are glad ended.)

It may be hokey, but it has the power to make you cry. Yes, singing the “Cornell, Greater Be Thy Name” lyrics by Jennie Francis Cook (Class of 1910) with other Cornellians at poignant moments like Commencement, opening ceremonies, and Homecoming convocation gives a sense of belonging, pride, and loyalty. “When from thee we’re far away, tears of mem’ry dim our eyes, as loved scenes before them rise, then we’ll sing and then we’ll say: Cornell greater be thy name.” Pass the tissues, please.

When The Commons opened in January 1966, its most noticeable feature was the orange carpet on the sunken floor of the atrium. Why orange? According to then-President Arland Christ-Janer: “What we were looking for was an accent that would draw you in … something that said POW!, and orange seemed to do it!” When the 2014 renovation took place, a few people suggested replacing it with purple carpet. That idea was quickly nixed as the OC, as it has come to be known, had become sacrosanct.

The carpet is replaced every few years to keep it looking fresh, and one summer Special Assistant to the President John Harp asked the crew leader if he installs a lot of orange carpet. “His immediate answer was with a laugh: ‘No, but we take a lot of it out,’” Harp says. “Somehow, the comedy in that supported the pride we feel for the OC.”

In 1889 a 5,000-pound boulder, hauled six miles on a horse-drawn wagon from The Pal by members of the senior class, came to rest in front of South Hall. The seniors carved their class year into the granite and left with satisfaction at the permanence of their self-tribute.

They had created one of Cornell’s oldest traditions. But its location was not to be permanent. Moving The Rock, in addition to painting, burning, and stealing it, is a tradition that unites Cornellians from that day until now. The Rock may be a symbol of permanence and indestructibility, but Cornell students of all eras are nothing if not up to the challenge of moving the unmovable … or using it to relay messages like a stone-age Twitter account.

The moose head that has hung in Law Hall since 1925 is the survivor of a natural history museum the college once operated. He disappeared briefly in the late ’70s until Professor of Math Ed Hill spotted him at a Cornell tag sale and returned him to the building. When Law Hall closed for renovation in 1999-2000, the moose took an extensive, well-deserved vacation, sending back postcards from around the world. By then known as Cornell T. Moose, he got himself a makeover, set up a Facebook account, and now lives stoically on the wall overlooking Law Hall’s Moosehead Lounge.

Cornell athletic teams were called the Purples or the Hilltoppers until the 1949 Royal Purple yearbook staff decided to hold a contest for a new mascot because nobody knew what a Purple or a Hilltopper was. Keith Colvert ’51 came up with the Ram, took the $5 prize, and established one of Cornell’s most enduring traditions.

At some point a live ram dubbed Ulysses was brought to town from a nearby pasture for display during football games. In 1985 Jamal Abdullah ’88 achieved a first by coming to the games dressed in a ram costume. The costume has gone through several iterations, worn by countless overheated volunteers, and in 2021 the best Ulysses mascot yet was revealed.

Some rituals are pure jubilation, like the ringing of the victory bell at Van Metre Field after a win. This year Head Football Coach Dan Pifer is bringing back the “Cornell Fight Song,” rediscovered in an old songbook and recorded for him by members of the music faculty. OK, alumni do sing it, led by Keith “Turp” North ’60 after the C-Club Breakfast each year. But just wait for it to be sung by the 90-member football team before they strike the Ash Park victory bell. Go Rams, and in the words of composer-lyricist Claude Rose ’33, “Fight for the Purple and White”!

Each year Cornell’s students put on the Culture Show, a spectacular production showcasing performances with an international flair. Produced by the student organization Eyes of the World, it began in 2004 on the Orange Carpet and has grown to a standing-room-only extravaganza in Kimmel Theatre.

In 1890 some students “stained” the chapel steps, but it is uncertain when the tradition began of painting the concrete sidewalk squares in front of King Chapel with Greek letters. The continuous repainting of these squares eventually made the sidewalk so slick that in 1990 the college poured two flanking rows of concrete squares for the groups to paint while leaving the central path safe for pedestrians. When the walkways were redone in 2020 the sidewalk squares were re-laid. Greek groups long ago incorporated the squares into their activities, beginning pledging at the squares, and meeting there to celebrate following Commencement.

On the day they move in, students are welcomed with a ritual as they arrive at New Student Convocation. The long line of brand new classmates processes along the Ped Mall between rows of faculty members welcoming and clapping for them from both sides of the walkway. Four years later they process between faculty ranks once again on the way to their Commencement ceremony, held in the same location (pending pandemics and rainstorms) beside McLennan College Hall.

Ringer Distinguished Professor of Sociology Tori Barnes-Brus ’97 says there’s no comparison between the look on their faces that first day and at Commencement: “At graduation they’re different, the students are confident and find familiarity in the faculty’s faces. Faculty are shouting their students’ names and high-fiving them. It’s really emotional and meaningful for me.”

If your last name is Zhao or Zeligman or Zimmerman, you get used to being last in roll calls and ceremonies. But not at Cornell. Our Commencement lineup is based on affinity. This unusual practice (which dates to 1973) allows graduates to participate in the culminating event of their four years on campus seated next to the friends they made here. Every graduate carries a card with their name and hands it to the Provost onstage to read. No one knows who is walking when, since the printed program is a keepsake in alpha order.

Every year when the Iowa air has turned crisp and cold, the campus seems to hold its breath in anticipation of a ritual that has been repeated for decades. Waves of students, faculty, staff, and community members pack themselves into the gymnasium.

Friends and hall-mates pile in wearing matching homemade T-shirts under bulky jackets, often carrying banners made in the Thomas Commons notched under an arm, waiting to be unfurled at the right moment.

When the gym is full to bursting, just when the crowd begins to get restless, the friends and classmates they came to see run onto the floor. Every step they take and every move to the basket is a bit quicker. They feel it too.

And then it happens.

If the night is clear, the roar that erupts from the Small Sport Center can carry up the hill, and students who didn’t or couldn’t brave the crowds look up or cock an ear to the sound of mayhem coming from the gym. Because they know.

They know that, as the din subsides, the gym floor is completely, utterly, and spectacularly covered in toilet paper.

For a campus that wraps itself in history like a warm winter cloak, the toilet paper toss that accompanies the first basket scored by Cornell College in its home game against rival Coe College is a relatively young tradition, even if it is beloved among students.

From “Why Athletics Matter to Cornell” by Blake Rasmussen ’05, spring 2013 Cornell Report