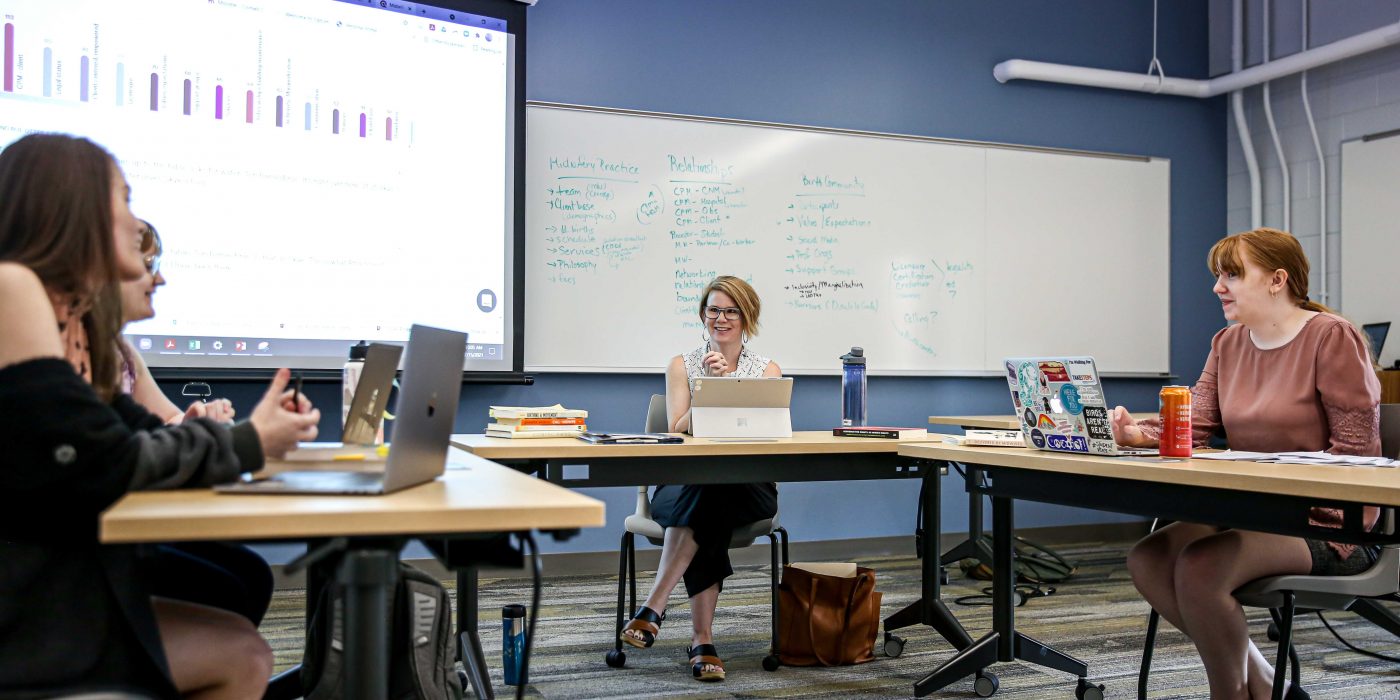 The group started with a broad question that has been examined by Barnes-Brus for months as she conducted research during her sabbatical.

That question: How do midwives create community?

“It’s this broad topic, right? That’s pretty typical with qualitative research,” said Barnes-Brus. “You have a big question and then you take a grounded theory where you see what the data says. You let the respondents guide your research focus.”

For this research, the data the professor is talking about comes in the form of interviews with several midwives.

“I learned a lot,” said Anna Ertl, who participated in this CSRI research and is majoring in anthropology. “I had never really done interviews before, so that was exciting for me. I was nervous at first but once we did more and more I became more comfortable. We were actually given the opportunity to jump in and ask a few questions of the midwives, so that was great.”

The Cornell College students transcribed the interviews and uploaded the midwives’ words into a qualitative data analysis software.

“We categorized main patterns or themes within the transcripts and that’s how we were able to analyze the data and pull meaning from it,” said Annabel Tagawa, a senior sociology and anthropology major.

Each of the three students found a topic they were passionate about to pursue more deeply during the eight weeks of CSRI. Junior Ruthie Hale wanted to understand the legal aspect of midwifery.

It’s different across the United States and the practice is stigmatized, often due to a lack of understanding. There can also be a lot of controversy surrounding midwifery.

“It’s a lot harder to practice when you don’t have a license,” Hale said. “You have to be wary of legal parameters. We talked to a lot of midwives who have been investigated or charged, and that’s an expensive process.”

Tagawa wanted to learn more about sustainability and burnout related to the practice of midwifery.

“My biggest takeaway was the importance of relationships in maintaining sustainability and avoiding burnout, specifically, relationships with other midwives within the community and building those connections–midwife to midwife relationships that’s what I’m calling it,” Tagawa said.

“Some components of that are a client-centered approach where the needs of the birthing person are put before anything else,” Ertle said. “Also the authority is given to the clients so they are able to have the experience they want to have in their pregnancy and birth. Another thing is the continuity of care, which can be defined as quality care over time. Midwives ensure their clients are all set to go before they end the care with them.”

Barnes-Brus says she has three goals through her research. First, she wants to take her findings back to the midwives in her study to explain how to engage more people in the community. Second, she wants to raise awareness about what midwifery can offer. Third, she’s exploring the sociological aspect of midwifery.

These researchers say there’s a maternal health crisis going on across the U.S., in terms of quality care for people who give birth, and midwifery can play a big role in changing that.

“We’re broadening this idea of what birth can look like,” Barnes-Brus said. “What we’re advocating for is more options, more understanding, specifically more understanding of midwifery and home birth, but also more public discussion about what birth typically looks like in a hospital with an OB, how that is different when a midwife is present, and even what birth is like in a birth center.”

Barnes-Brus says her team of three did great work during CSRI, and she’s excited for the future of this research.

“I’m so grateful for the relationships that I’ve been able to build with these three students and to see them grow in eight weeks,” Barnes-Brus said. “And to see them really think about and focus just on this while not working on other things in their block class. They weren’t working at other jobs and they were able to be full-time researchers. They did amazing work.”