Cornell College’s new Director of Instrumental Music Josh Neuenschwander says music is ingrained in everything he does. It’s a part of who he is, and he can’t imagine life without it.

Now he’s ready to take the conducting stage at Cornell College and share that love with music majors and music lovers.

“I’m excited about the level of music you can do with college ensembles and the kind of connections you can make,” Neuenschwander said. “I have enjoyed the deep thought you get when working with college students.”

This Cornell professor will conduct the band and orchestra and notes that he’s planning all kinds of new music.

“I’m very passionate about doing music by a wider array of more diverse composers than the traditional wind band repertoire and the orchestral repertoire,” he said. “One of the things I’m looking at out of the gate is trying to play a lot more music by living composers and a lot of music by composers who are representative of the diverse student body that we have here.”

As part of his programming, he’s also looking to the future when he’ll commission new works that would premiere on Cornell’s stages.

“There’s nothing more exciting than playing a piece of music that has never been heard before and getting to really bring that to life,” he said. “That’s my big passion and something I’m excited about.”

Offstage, he’ll be teaching several courses including a new class called Beginning Electronic Music, which he has designed for a variety of students, including those with no musical training all the way up to aspiring professional musicians. It will cover techniques for electronic music creation and beat making.

While he’s just getting started here at Cornell, Neuenschwander is not a beginner. He’s been teaching middle and high school students for several years before receiving his doctorate at the University of Iowa. 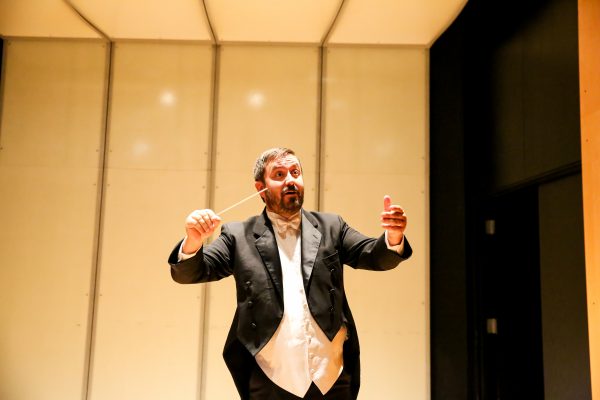 “My grandpa was an engineer by trade but he was an avid amateur pianist and organist. When I was 4-years-old I would sit next to him at the piano bench and watch him play. I figured out what keys he would play that matched the notes on the page.”

He also discovered his love for conducting at a young age, which is now his passion.

“The first time I saw the Detroit Symphony was in second grade, and I thought it was so cool that somebody was standing up there and getting all of these people to do all of these really neat things.”

It’s that energy and passion that he’s excited to share as he works to encourage future music teachers, inspire students to take on careers in the field of music, and introduce newcomers to the world of music through his classes.

And just maybe after their experience with the Cornell Music Department, students will feel a bit like Neuenschwander and learn they can’t live without music.