Chris Chapman may have finished his football career at Cornell College, but he’s continuing to share his love and knowledge of the sport with the next generation.

Chapman graduated in May of 2020 with a B.S.S. in kinesiology–health and physical education teaching and his K-12 education certification. The Cornell offensive lineman was quickly hired the summer after he finished classes by the Mount Vernon Community School District.

“Mount Vernon is one of the best communities in the world, everyone here feels like they’re family,” Chapman said. “Whether I run into people at the grocery store or the gas station, most people know your name and want the best for you.”

He’s now enjoying his new career as a paraprofessional at the middle school where he also teaches 7th and 8th-grade strength and conditioning. In addition, he coaches football.

“In 2020, I coached 7th-grade football alongside Class of 2019 graduate Colton Clark,” Chapman said. “Our team went 4-0-1 in my first season coaching. Our one tie came against Clear Creek Amana, where the Mustangs were down 16

points with 3 minutes left in the game, we came back and tied, sadly no overtime in Middle School football. I had so much fun coaching my group of kids this past year, they were all eager to learn and get better every day at practice, and that made my job as a coach very easy.”

He says his favorite part about his job at the middle school is building relationships with his students and working to make a positive impact on their lives. He says Cornell athletics and academics prepared him for his future because it taught him how to prioritize everything he needed to do to be successful in life, and he fondly remembers his classmates and teammates.

Even though he has graduated, the coach still 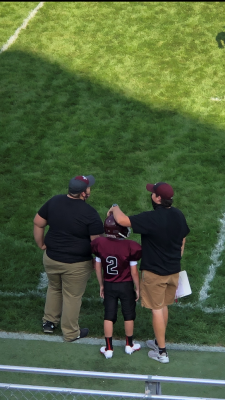 “I felt like a proud parent twice over watching my former student and advisee coach my son throughout the season!” Meyer said.

Chapman, who is just beginning his career, says he’s grateful to his Cornell coaches who taught him how to be the best man possible and now hopes to provide that to his own team as he shares his love for the game of football.