Rams basketball players Wes Butterfield ’91, who came to Cornell from Florida, and Rose Shimaoka ’20, who came from Hawaii, compared their experiences on campus during a Zoom call. Their conversation was edited for length. 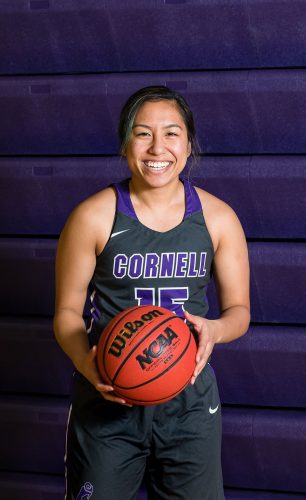 ROSE: I found Cornell online. A family friend sent a highlight video to Coach Brase, and he invited me to visit. I thought, why not? I loved the girls, the small community, and how everyone knew each other. I loved the block plan for sure. Something called me to do something new. I wanted to go far away from home as well.

WES:  I never visited the school. I was far away from home, a person of color, didn’t know hardly anyone on campus, and during New Student Orientation my roommate and I didn’t go to anything. But I had no intentions of ever leaving. I just had the greatest experience. Those four years were so wonderful.

ROSE: Wow, that’s so funny that you didn’t go to orientation. I thought it was a big thing, so I set three alarms because I was still adjusting to the time zone difference. The basketball girls were there and checked up on me. There were also some in my grade from California and Colorado, and we bonded over being far away from home.

WES: We have lots of the same memories, like meeting those basketball guys. That’s part of what kept me going and thinking about coming back and working hard. It’s that bond that you have with your teammates. That’s one of those things that spans generations.

ROSE: I totally agree. If I wasn’t in sports, I don’t think I would’ve stayed for four years. They really helped me when I got homesick during the winter. We did a lot of things as a team. We did Chili Cookoff on Main Street, visited the nursing home and the Mount Vernon elementary school. We also did faculty feast week, each inviting at least one faculty or staff member to eat lunch with us as a team.

WES: Rose, we never did anything like that! That sounds so great. I had a great experience, but I don’t have those kinds of memories of doing things in the community. We played hard, we practiced hard. Cornell gave us space to do other things—a good balance between academics and extracurriculars. I think that’s terrific that Cornell does that now.

ROSE: That’s another reason I came—they told me all the things they do. We got involved with other sports as well. Coe games were the games that brought everybody together. Nonathletes and athletes.

WES: It’s always been that way. That was the game that we marked on the calendar at the beginning of the season. Everybody wanted to score that first bucket. When the toilet paper flew, we’d take our technical, clean up the floor, and keep on playing.

ROSE: Yes, I think everyone was so hyped. I was nervous, but hyped. You would go out and see so many people in the stands holding the TP and waiting for that first bucket. My freshman or sophomore year, I made the first bucket. I love the tradition. It’s meaningful.

WES: We won conference at least a couple years. One of the nice things about DIII, I can say I competed in a track meet and played in a basketball game on the same day. It was neat that Cornell gave me the opportunity.

Rose, talk about being a person of color on campus.

ROSE: My freshman year I started to realize that I was in a PWI [predominantly white institution], and I kind of felt weird. But there were a bunch of other Asians and people from China and Japan that I got to be friends with, and other people from Hawaii. BACO, which is the Black Awareness Cultural Organization, helped out too. I thought Cornell did a good job of intertwining the cultures. I applaud Cornell for all they have done to improve inclusiveness and diversity on campus.

WES: That was probably lacking when I was a student there, but I always felt welcomed. I lived on zero deck of Olin Hall. The entire residence hall was all men. My floor was a terrifically diverse floor. We had a great time. I always felt welcomed and supported, particularly by my floormates.

ROSE: I agree with you on that. I never once felt unwelcome at Cornell. Plus I was a person wanting to learn other people’s culture and lifestyle.

WES: When you think back over your four years at Cornell, what would you tell somebody interested in playing sports or coming to Cornell?

ROSE: I would just say try whatever is calling your name or sparking your interest because everyone is willing to accommodate you.

WES: I would agree with that. The biggest takeaway was, everyone wanted to win so much but we also balanced that with making sure we could graduate in four years, and we did many other things. I’m a big believer in the liberal arts. Try lots of things and see what sticks. You leave a changed person and hopefully for the better.

ROSE: That’s for sure. Coming into Cornell I was very shy. I ended my senior year getting involved with the community and the school. Definitely, my teammates and friends helped me reel it back in if I ever got stressed out. They were my second family that I wouldn’t trade for anything in the whole wide world.

Butterfield majored in history and is senior vice president, consulting services, at Ruffalo Noel Levitz. Shimaoka, who majored in kinesiology-exercise science, is a medical screener and a rehabilitation behavior technician.