B.A. with an individualized major in creative and political social advocacy

Questions and answers have been edited for clarity and length.

How has Cornell prepared you for your future? I loved my time on the executive board of the Third-Wave Resource Group (TWRG). Aside from the discussions we led on intersectional feminist issues and the work we did to support survivors of sexual violence, the collaborative experience of running the group and living in The Cottage with the rest of the TWRG e-board was really valuable for me. TWRG has been a part of the Cornell community since 1986 (when it was called The Women’s Affinity Group, later renamed in 1988 as TWRG) and I loved knowing that I was a part of that history and carrying on that legacy.

Can you identify people you considered to be mentors at Cornell? My advisor, Professor of English and Creative Writing Rebecca Entel, has definitely been a mentor for me in the past couple of years. She helped me construct my individualized major, was supportive and encouraging of early inspirations for what would become my senior capstone essay, and has continued to be a resource and guide for me this year, even though she’s on sabbatical and has absolutely no obligation to continue answering my emails and sending me pictures of her adorable dog. My voice instructor Ben Laur has also been very supportive throughout my time at Cornell.

What is the coolest topic you studied for an 18-day block? What made this block stand out to you? In the first block of my junior year, I took a joint English/Sociology class on Literature and Social Justice. In addition to reading books about social justice and books that had sparked social change, we also spent two weeks in Chicago, where we met with people and learned about organizations that are doing work right now at this intersection of literary activism.

It was just a very cool topic to learn about, and going off-campus to see Chicago from this perspective was unforgettable. Getting to travel and live with my classmates and professor for those couple of weeks was also a very unique experience.

Spending that much time together, bonding over food we ate and weird things we saw on the train, and staying up late talking about what we’d done that day (and how tired we were!) had a really positive impact on the class environment. One of my closest friends now is someone that I met in that class. It was an amazing experience that I never would have gotten from a semester plan.

If you could share with your high school self some words of wisdom that you’ve since learned since being at Cornell, what would it be? I mean, if I could have told myself about what my major was going to end up being, that would have saved a lot of time. Or COVID! I definitely would have appreciated a forewarning about COVID. But apart from knowledge of the future, I think what 18-year-old Madeleine most needed to hear when she was preparing to go to college was that yes, things are going to change, but it’s going to be okay. You will be able to keep in touch with the people who matter. You are better at making friends than you think you are, and you’re going to find people who will love you for all of your overenthusiasm and nerdy hobbies, and awkward tendencies. I think that 22-year-old Madeleine, preparing to graduate college, needs to be reminded of that every once in a while, too. 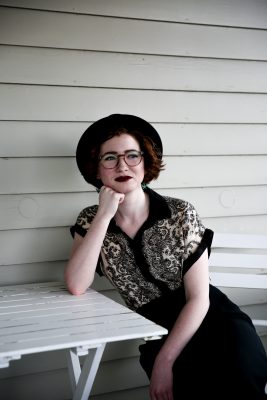 What’s something you learned about yourself during your time at Cornell? While there is definitely a sense of accomplishment that comes from finishing an assignment or hitting submit on Moodle, I need to periodically do something crafty with my hands to keep my battery going. Whether it’s a cross-stitch project for a friend, sewing a pair of overalls in a costume construction class, propagating my succulents, or cutting my own hair (which I did for the first time since preschool a week after arriving on campus for my freshman year when I realized that I was the only adult supervision I had, and nobody could stop me), there’s just something about creating something tangible, physically altering the world in some small way, that’s deeply fulfilling for me.

What is your proudest accomplishment as a Cornellian? In Block 5, for my English senior seminar, I wrote an essay about my family’s history and my own identity and experiences of growing up in a Jewish and interfaith household. At the end of the block, Director of the Center for Literary Arts Becca Klaver suggested that I submit it to a couple of literary magazines, and in April, my essay “Stories from the Wilderness” was published online by Entropy Magazine. It was very exciting not only to have written something that both my professor and the Entropy editors thought should reach a broader audience but also to know that people I’ve never met and will never meet would read and be impacted by my work. I definitely wouldn’t have been able to accomplish this on my own.

One of my favorite parts of creative writing classes at Cornell has always been peer workshop; I love the opportunity to read and offer feedback on early drafts of my classmates’ work, and to watch someone’s writing evolve over multiple classes together, and it’s really wonderful to have peers respond to my work in return. I enjoy hearing what people think or notice, getting ideas I wouldn’t have thought of myself, and knowing that there are people familiar enough with my piece to help me through roadblocks down the line. The thoughtful and dedicated feedback of my classmates in our workshop groups throughout the block was instrumental in helping me shape this essay into something I can be proud of. And, of course, I never would have thought to pursue publishing if Becca hadn’t reached out and helped me with the submission process.

Was there anything you learned at Cornell that changed your perspective significantly? My first sociology class sophomore year was an incredible experience. I remember Professor of Sociology and Anthropology Tori Barnes-Brus asked us to think of Cornell-specific cultural habits, and then led us to understand how even very small behaviors, such as walking around rather than across the OC to get to the printer, were somehow a constructed part of this culture and not choices we were all individually making in a vacuum. It completely changed the way I saw the world. I wasn’t entirely unfamiliar with the idea of broad concepts in our lives being culturally specific, but that class really opened my eyes to thinking so much more about what kinds of things are influencing even the small and inconsequential choices we all make in our daily lives, and how our actions are a part of this much larger social picture. I really think that everyone should take at least an intro sociology class. It really blew my mind and gave me so many more tools for thinking about the world in different and more interesting ways.

What’s one thing you did during your time at Cornell that you never thought you’d do? Joined a fraternity! Greek life was not something that was even on my radar when I was looking at schools, and even when I first started going to Phi Kappa Nu parties, I had no real intention of pledging. But I’m glad that I did. In spring of 2020, both for the two weeks of quarantine after I was sent home early from my semester in Paris, and for the months that followed, weekly Newt meetings and game nights meant I had a community and activities to connect with while we were all stranded alone in our homes. It’s been really lovely to have that outlet and support this past year.

What are your short and long-term plans after Cornell? I am moving back home to Minneapolis to spend some time with my dogs, play D&D with some friends from high school, and look for jobs in writing or non-profit work.

What is your favorite Cornell memory? In my junior year, some of my friends and I thought it would be a good idea to buy six of those ridiculous two-person sweatshirts and to cut them up and put them back together as one eleven-person sweater. We roped my friend Charlie Kelley-Pegg into doing a photoshoot for us so that we could make a silly holiday card to send to our families. While we were all standing out behind Merner, wearing one long sweater, another student driving by shouted “y’all are so cute!” from across the street. Charlie managed to capture the exact moment we all reacted to this stranger being just as thrilled by our antics as we all were. It was very funny and it’s one of my favorite pictures.

What’s something about Cornell that makes you smile? I always love hearing the bells from King Chapel. And the train! It took some getting used to freshman year, but after four years, I think I’m going to miss it.

Favorite spot on campus: The swing on the porch of The Cottage. I lived there for a year and a half, so it still feels a lot like home, and it’s a nice place just to sit outside when the weather’s nice and read a book or listen to some music. Especially this year, when I’ve spent the vast majority of every day within the same four walls of my room, it’s been nice to have someplace to go to get some air when I need a break.