B.A. in philosophy and Spanish

Questions and answers have been edited for clarity and length.

What are your short and long-term plans after Cornell? I will be working at the Kansas City Public Library immediately after graduation, and in the long term, I plan to go to graduate school or law school.

How has Cornell prepared you for your future? Cornell really made me look at the world in so many different ways. Having to change classes so frequently on the block plan meant I was constantly shifting my perspective and ways of viewing the world. I went from having a microbiology class to looking at the poetry of Nicolás Guillén, all in the span of two months. I think that this has made me a more well-rounded person who is able to consider many different points of view, and it also has given me the skills to be adaptable.

Why do you think studying philosophy and Spanish at Cornell is beneficial? Because of the block plan, Cornell lets us do a deep dive into whatever we are studying. This means we get to become super immersed in deep and important questions about the nature of reality, being, experience, morality, and other philosophical points, and also in any language we are studying. I’ve had dreams in Spanish before while on the block plan. Being able to be fully immersed in each of these areas of study lets us consider them in different ways and learn different things than on a traditional semester system.

Can you identify people you considered to be mentors at Cornell? There are so many people who were my mentors at Cornell! That is one thing I love about Cornell—there are so many wonderful people. All of the professors in the Philosophy Department (Genevieve Migely, Jim White, Megan Altman, and Paul Gray), the Spanish Department (Alyssa Selmer, Fernanda Díaz-Basteris, Michael Mosier), and the mock trial coaching staff (Abbe Stensland, Vince Geiss) all had a tremendous impact on me. All of them helped me develop my academic and professional skills, encouraged me to grow as a person, cared about me as a person and not just a student, and made my experience at Cornell amazing. They all supported me so much, each in their own way, and I would not be where I am today without them.

What is the coolest topic you studied for an 18-day block? What made this block stand out to you? I have so many amazing courses that I took, it’s hard to pick just one. Maybe this is recency bias, but my last class at Cornell (8th Block this year) has been amazing. SPA 365: Female Caribbean Writers: Crisis, Body, and Space has just been incredible. It has really let me combine both of my majors to learn about things I had never considered before. So much of that class is learning about things that aren’t traditionally taught in academia, like looking at female Caribbean slam poetry, or ways to decolonize the conception of the Caribbean and the world as a whole. Plus we had several of the authors we read come and speak to us in class, which was absolutely incredible! Of course, all my other classes were great too.

If you could share with your high school self some words of wisdom that you’ve learned since being at Cornell, what would it be? I would tell myself to worry less and enjoy more. Life comes at you fast on the block plan, and you really learn how each moment is worth as much as the next. I’ve really learned how to enjoy being in the moment during my time at Cornell.

What’s something you learned about yourself during your time at Cornell?

I learned that I can push my boundaries and do things that I ordinarily would have been terrified of doing. Several times at Cornell I’ve been pushed to go do something different, have a new experience, broaden my horizons. I never thought I could push myself as I do now.

What is your proudest accomplishment as a Cornellian? In the summer of 2020, I did research with Professor Megan Altman and Professor Michael Mosier as part of the Cornell Summer Research Institute. The essay that I wrote as a part of that research will be published in Areté, the Rutgers University Undergraduate Philosophy Journal, and I was able to present my essay at three conferences. 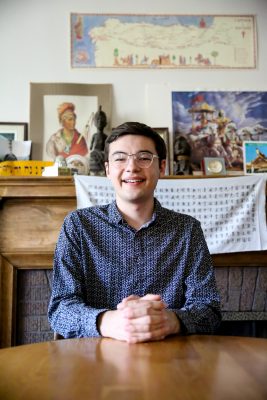 Was there anything you learned at Cornell that changed your perspective significantly? I took a philosophy class, titled Latin American Philosophy, my sophomore year. I knew I was interested in that kind of thought, but I never expected it to totally change how I viewed things. How I thought about myself and others in the world was dramatically altered. I began to consider things from non-traditional, non-white perspectives. That class really taught me to look outside the box, so to speak, and to critically reflect upon our own society and the situation of the world as a whole.

What’s one thing you did during your time at Cornell that you never thought you’d do? I went snorkeling! I was always very afraid of the ocean, and I never thought I’d go deep enough so I couldn’t touch the bottom, much less go into deep water with live fish and other marine animals. In December of 2019, I went on an Alternative Service Break trip with the Civic Engagement Office to Puerto Rico where we spent a week serving communities in Luquillo, Puerto Rico, with disaster relief. On one of the last days of the service trip, we got the opportunity to go snorkeling. At first, I didn’t want to try it, but with the help of my friends on the trip, I convinced myself to go into the water. It was an incredible experience!

What is your favorite Cornell memory? There are so many, it’s hard to choose from! One of my favorites has to be from my time on the mock trial team when we made it to the Opening Round Championship tournament this year. We battled through so much adversity and hardship, and it was so satisfying to hear “Cornell College!” announced as a team that made it to the tournament.

What’s something about Cornell that makes you smile? Late Night Breakfast and walking on the Ped Mall! Both are wonderful aspects of being a Cornellian that make me feel a sense of belonging and connection to the community.

Favorite spot on campus: Prall House, because it is this old cool house with a vast repository of knowledge.

Favorite food served at the Hilltop or Zamora’s: It has to be the tomato mozzarella panini from Zamora’s! That has fueled many late-night study sessions for me and my friends.

What you’ll miss the most: The community—my professors, friends, classmates, and Mount Vernon.