In the Caribbean Sea, a small French island is typically preparing for a large, colorful celebration known as Carnival, but not this year due to the pandemic.

It, however, was not that long ago that Cornell College students saw the full-scale Mardi Gras festivities first-hand when they spent the entire block studying the landscape, language, and identity of Martinique in February of 2020 before COVID-19 caused any cancelations.

For Professor of French Devan Baty and her students, it’s a celebration they’ll never forget.

“Carnival is lively and fun,” Baty said. “From “Dimanche gras” (Fat Sunday) through “Mercredi des cendres” (Ash Wednesday), each day has its own particular traditions and colors. On the last night of Carnival, there is a bonfire in which the king of the carnival, or ‘Roi Vaval’–represented by a giant float–is burned.”

Students say one of their favorite parts of the block in Martinique was living with a host family and experiencing all of the traditions and culture with them, especially the large celebrations and parades during Carnival. Students learned that there was more to the beautiful floats than they originally thought. A major theme was the degradation of the natural environment by the controversial use of chlordecone, a toxic pesticide previously used on banana plantations in Martinique.

“Carnival is a celebration of and pride in Martinique culture, while it is also a coming together for Martinicans looking to improve the future. It was exciting and humbling to be welcomed into such a space,” said senior Ariel Barbee, who is a French and English–creative writing double major.

The course included lessons on the island’s history, geography, and the evolving relationship with Metropolitan France.

“Martinique is part of the Lesser Antilles and became a French overseas department in 1946,” Baty said. “Today, its official status is a ‘territorial collectivity’ of France. 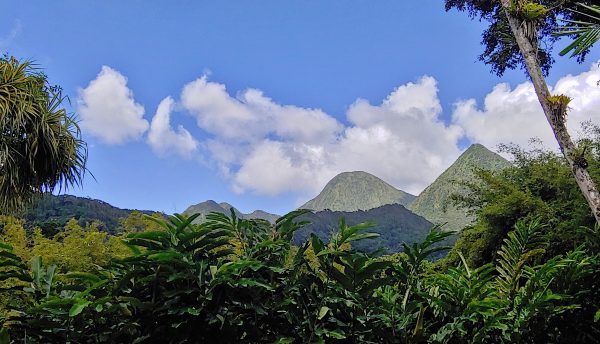 Throughout the 17th and 18th centuries, France profited from its sugar plantations on Martinique that were powered by African slave labor. The advent of Indian and Chinese indentured labor in the 19th century contributed to the rich ethnic diversity that we see on the island today where over 90% of the population is of African or mixed descent.”

Cornell’s French Department plans a study abroad trip every other year during non-pandemic years. Students didn’t have to worry about missing any other courses since they study One Course At A Time. They left the Hilltop with just one mission, to explore and learn about Martinique.

“While there were tourist aspects to this trip, such as going to museums, the fact that I lived in Martinique for almost a month meant that I also got to feel like I was living at home and connected with my host family in a new way,” said senior Jo Coleman, who is majoring in anthropology. “I rode the bus, which on other travels, I wouldn’t have done, and I got really good at asking about stops and figuring out how to get to places on my own. This course has made me realize how important it is for me to be able to find a home wherever I go, regardless of language barriers.”

The class participated in many cultural activities as they immersed themselves in the daily lives of the people of Martinique.

Baty notes that highlights from the trip included hiking on Mt. Pelée, participating in Carnival, visiting the former office of Aimé Césaire, celebrated poet, long-time mayor of Fort-de-France and deputy to the French National Assembly, learning how to dance to traditional bélé music, kayaking in a mangrove, and a hands-on lesson sailing a yole boat. The class also enjoyed visits from several local experts, including Raphaël Confiant, a well-known author and advocate for creole language, literature, and culture.

“My biggest takeaway from the trip was understanding the value of learning about cultures different from your own and widening your worldview as much as possible,” said junior Emily Lucie.

One year later, students look back fondly at their time in Martinique as they remember everything they’ve learned on the study abroad trip.

“Many of our students have never had the opportunity to immerse themselves in another culture; especially one in which the people speak a different language,” Baty said. “Studying abroad is really transformative for students when they can interact directly with the local population and build meaningful relationships. Courses like this empower students to broaden their horizons and experience the world beyond their comfort zone.”

Next year, students can travel to Aix-en-Provence, France, with Professor Rebecca Wines for Block 5.