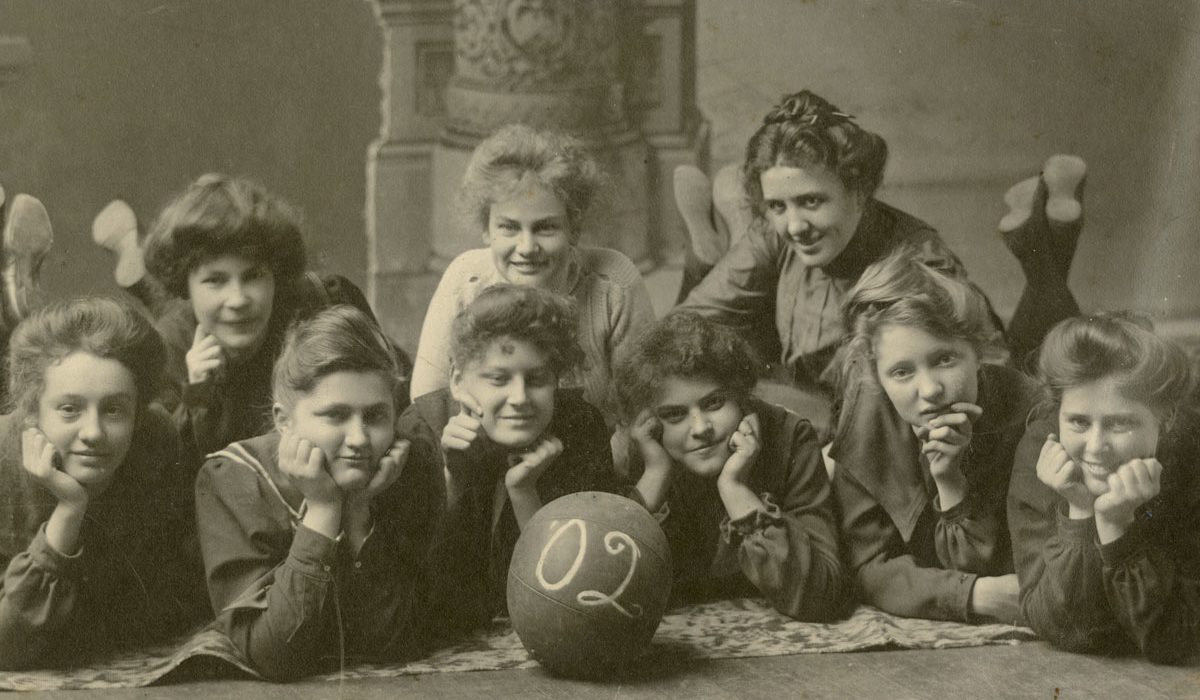 Coeducational colleges were exceedingly rare when Cornell College, then known as the Iowa Conference Seminary, opened for women and men in 1853. It was the first coeducational institution of higher education in Iowa and one of the first in the nation.

In 1858 Mary Fellows received her diploma, giving Cornell the added distinction of becoming the first college west of the Mississippi River to grant a baccalaureate degree to a woman.

Thus began a long narrative of pioneering for women’s rights. Our top moments in women’s history celebrate the strong women who made their way at Cornell, from then to now.

Cornell College, opened in 1853 as the Iowa Conference Seminary, was the first coeducational college on the Iowa frontier. Oceanna Hayzlett, a 13-year-old girl, enrolled as the first student. Preceptress Catherine Fortner taught the first class. Women and girls comprised 35% of the student body of 161 that first year, which for practical reasons then and into the future included instruction for younger students not yet prepared for college.

At a time when some academic subjects were considered inappropriate for mixed company or too indelicate for feminine sensibilities, Cornell women were admitted to the same degree programs and courses with the same privileges as men. They studied equally alongside men, most notably in science classrooms and laboratories, before women at most other colleges and universities were allowed to do so.

Mary Fellows became the first woman to receive a baccalaureate degree from a college west of the Mississippi River when she accepted her Cornell diploma in 1858. The Class of 1858 had perfect gender parity with one woman and one man. The two were transfer students who had completed their coursework for the baccalaureate at the end of the 1856-57 academic year, a few months before the Iowa Conference Seminary legally became Cornell College. Thus they had to wait a year to receive their degrees. In September 1858 the classmates married each other. Matthew Cavanagh became a lawyer, and Mary Fellows Cavanagh a teacher.

Bowman Hall, now Bowman-Carter Hall, was the first women’s residence hall built expressly for that purpose west of the Mississippi River. When it opened in 1885 Bowman had hot and cold running water, steam heat, bathrooms on all four floors, and carpets from Marshall Field’s. It was highly unusual in the 19th century for a college or university to finance a building this fancy for its women students. Except when the U.S. Navy housed men in Bowman for its World War II flight preparatory school, Bowman-Carter has housed only women. The striking and well maintained Victorian hall remains a testament to the important place of women at the college.

In 1871 Cornell Professor Harriette J. Cooke was promoted to full professor of German and history and given pay equal to her male colleagues—believed to be a first in U.S. higher education. She had arrived in 1857 to teach Latin in the preparatory school, the year the Seminary was renamed Cornell College. In a time when single young women were encouraged to bring instructions in manners, morality, and literacy to the uneducated, Cooke’s ambition to excel and give equal opportunity to women would energize her double appointment as preceptress of women and professor. After 33 sometimes turbulent years, during which she established herself as a leader with a “commanding presence,” she resigned. She traveled to London to study and work at the Methodist Mildmay Deaconess House where she wrote a history of Mildmay as the first deaconess institution. With renewed energy and ambition, she carried that knowledge to Boston where she became superintendent of a settlement house. While there she developed a separate program of medical aid to the poor, which grew to a large Hull Street social service institution touching the lives of some 10,000 persons.

“Years after she left Cornell, Professor Cooke was affectionately remembered by many of her students, friends, and former colleagues. They knew her in Cornell’s formative years when she was tireless in her efforts to bring equal opportunity to her women students in and out of the classroom, assisting their forming literary societies, insisting on ladies calisthenics and later a ladies battalion, while campaigning for funds culminating in the building of Bowman Hall,” says Cooke scholar Gretchen Sutherland. “In her lifetime it was probably unknown that she had gotten equal pay for her work as professor.”

When compulsory military training began for male students in 1873, women demanded the same. Harriette Cooke (see #4) organized a company of women who drilled in skirted uniforms but had to carry wooden wands instead of rifles. In 1889 a Ladies Battalion was created, and by 1891 there were 112 women in uniforms that included scabbards for holding bayonets. Senior women were issued rifles.

Cornell’s Ladies Battalion, which functioned until 1898, may be unique in U.S. collegiate history.

Intercollegiate women’s athletics began in 1902 with a win over rival Coe College in basketball. A short account of the first women’s competition appeared in the Nov. 19, 1902, Cornellian, which noted that Cornell won but did not include a final score. The Royal Purple reported that interest in women’s sports picked up after enthusiasm for military drill died out. Although just one intercollegiate game was held in 1902, the yearbook noted there were 60–70 women in a tennis club, 25 in golf, 22 in field hockey, and two volleyball teams. The basketball team’s 1902 win over Coe gave the women an auspicious entry to our enduring college rivalry.

Cornell’s first Chinese graduate, a woman, was Ruby Sia, Class of 1910, of Foochow (now Fuzhou). Sia left China when there were very few Chinese students in the U.S., most of them males. She arrived around 1900, initially enrolling in the Academy (high school). Upon returning to China she spent 15 years on the faculty of Hwa Nan College, one of China’s first women’s colleges, and oversaw rural education in the Foochow District for 19 years. She was a major player in China’s educational reformation, serving on numerous national and regional boards and acting as a tireless advocate for the education of women at all levels.

Mary Bowman Seidler ’61 became Cornell’s first female Student Council president upon election of the student body in 1960. A banner headline in the March 18, 1960, Cornellian declared First Female Prexy of Council, with the lead paragraph announcing: Equality has been realized on the Cornell campus with the election of Mary Bowman to the presidency of the Student Council.

Seidler continues to be a Cornell leader. After retiring from Harris Bank in Chicago as vice president, she served as a Cornell Trustee from 1989 to 2005, and is now a Life Trustee. In 2017 she and her husband, Stanley Seidler, created a $1 million endowed scholarship for future Cornellians.

Madgetta Thornton Dungy ’64 was Cornell’s first female African American graduate and later became a Cornell Trustee. She went on to earn a doctorate in higher education administration at the University of Iowa, eventually retiring as assistant dean for faculty affairs and development at the University of Iowa College of Medicine. As a professional and volunteer, she has been recognized for her work in national, state, and local community organizations and associations on behalf of students of color, women, the arts, and nonprofit agencies.

Cornell’s Writing Studio is named in honor of Dungy, who said she often sent her writing assignments home to be reviewed by her parents, due to the lack of adequate support, encouragement, and feedback on campus. The college acknowledges her struggle and honors her accomplishments.

When the late Professor of Sociology Charlotte Vaughan was assigned to explore women’s issues on campus in the late 1970s, one of her findings was a lack of women’s perspectives being taught across campus. In 1983 she decided it was time to build a women’s studies program from already existing courses. Professor of French Diane Crowder authored the proposal, and it was approved by the faculty in 1984. The program, one of the first of its kind in the Associated Colleges of the Midwest, grew to a full-fledged major by 1989.

Since its inception courses have been offered in nearly every discipline as faculty members have developed courses based out of their primary department. This support of feminist scholarly work has changed the face of teaching and learning on the Hilltop. The first tenure-track faculty member specific to the program, Aparna Thomas, was hired in 2004. The program was renamed gender, sexuality, and women’s studies in 2014.

The Women’s Affinity Group formed in 1986 and took up residence that fall in Harlan House, formerly the academic dean’s home. Eleven women lived there the first year and held biweekly campus teas and monthly activities in residence halls. Its purpose was to establish an environment that promotes and encourages the awareness of women’s issues.

The group added a resource center and library in 1988 and renamed itself the Women’s Resource Group. In 2005 it became the Third Wave Resource Group (TWRG, pronounced twerg) to emphasize gender inclusiveness. For the past decade, TWRG has served as a victim advocacy resource for the campus and community.

Members of TWRG have also been part of a living-learning community for many years. In 2015 their community moved to The Cottage, a campus home located across from Ash Park. Much of their work to provide information, equality, and empowerment informed by feminism happens in locations across campus, including the Orange Carpet.

Although it doesn’t qualify as one moment in time, this list of prominent women’s rights advocates who spoke on campus is worth mention: