The most important days for many Cornell College students take place at the doorstep of College Hall. It’s the backdrop of their first and last days on campus during New Student Convocation and Commencement.

From those special gatherings to language classes and literary meetings, College Hall holds a special place in the memories of many within the Cornell community and has since its construction in 1857. Now it’s time to renovate the historic building to create a space for the next generation of Cornellians to build even more memories.

Thanks to a lead gift from Robert McLennan ’65 and Rebecca Martin McLennan ’64, the building, which will bear their name, will see many changes. Contractors will begin the College Hall Restoration Project, part of the Greater>Than Campaign, at the end of March and finish in time for classes in the fall.

“McLennan College Hall is home to a large number of our faculty–nearly 30,” said Provost and Vice President for Academic & Student Affairs Ilene Crawford, an alumna of Cornell College. “These renovations will enhance everyone’s teaching and learning experiences and physical comfort in many ways. I have so much gratitude for the McLennans and the other generous donors to this project because faculty and students in McLennan College Hall will soon get to enjoy this upgraded space.”

The nearly $3.6 million project will include renovated bathrooms, new ADA accessible entries, and a new HVAC system, which will introduce air-conditioning to the 19th-century building. Carpeting will be replaced, walls touched up, and new audio-visual equipment will be added to all classrooms.

“As a classical studies major, I spent a great deal of time in College Hall,” Crawford said. “I appreciate the care with which the renovations have been planned. When finished, McLennan College Hall will look very familiar, and will preserve the historic look and feel of the faculty offices, but it will also provide a finance lab and needed upgrades to the other classrooms to bring the building into the 21st century.”

That new finance lab will be the gem of the building. It will feature a financial ticker board anchored to the ceiling that will continuously stream asset prices, currencies, and other financial information to create the feel of a trading room.

“We are blending 165 years of history with technology as we remain very sensitive to the historical value of the building,” said Cornell Facilities Project Manager Scott Ladwig.

The lab will also have multiple large screen monitors, whiteboards, and functional seating that will allow the room to pivot between a conference-style room and a room with seating that accommodates group work.

Professor and Co-chair of Economics & Business Santhi Hejeebu says the ever-growing economics and business department will put this new lab to good use. They’ve seen majors double in the last five years.

“Business at Cornell College is on a growth path,” Hejeebu said. “We thought this was an opportune moment to return Cornell’s business curricula to the center of one of the most iconic buildings on campus. I say ‘return,’ because I understand that many decades ago “banking,” complete with adding machines and full-sized teller stations, was once taught in College Hall. The practice of liberal learning really ties Cornell’s past with its future. Our new finance lab will carry this tradition to a new generation of students.” 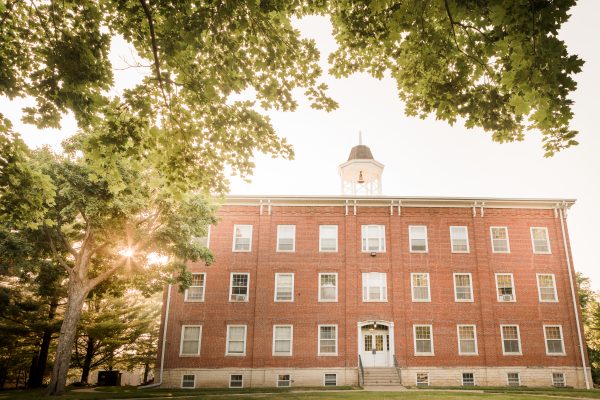 Many are thrilled to see the work on this building because it holds a special place in the history of the college. College Hall, originally named “Old Main” was the second academic building on campus and was the building that transformed the college from a seminary to a formal college. With very little funding, local craftsmen joined forces with trustees, professors, and students to build the structure.

While there will be significant work done to the building, the use will remain mostly the same with offices and classroom space. It will continue to house offices and classrooms for the education, economics and business, classical and modern languages, history, and sociology and anthropology departments.