After his first semester on the Cornell College campus, wrestler and psychology major Isaac Boucher points out three major benefits of being a Ram student-athlete. 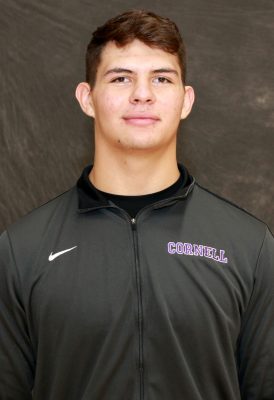 “The first is the relationships I have made with my coaches and teammates, helping me get through the scary first year of college phase,” says Boucher, who competes at 197 pounds.

“A second major benefit is simply exercising, giving me a purpose to improve, and a sense of belonging at Cornell. Ultimately, creating a better well-being for myself.

“Lastly, the concept of ‘just do it’ and ‘do it now’ really became influential in my life after Coach Hamm and McDonough explained this concept to the team.”

His favorite course so far has been Personality Theories with Professor Christopher Hagan. Boucher, of Kalona, Iowa, says it helped him understand himself, his behaviors, and his emotions better.