The Cornell College Department of Theatre and Dance, joined by artists from Eastern Iowa’s Cultural Corridor, proudly presents “The Laramie Project,” streaming on Dec. 18 and 19 at 7:30 p.m. and Dec. 20 at 2 p.m. 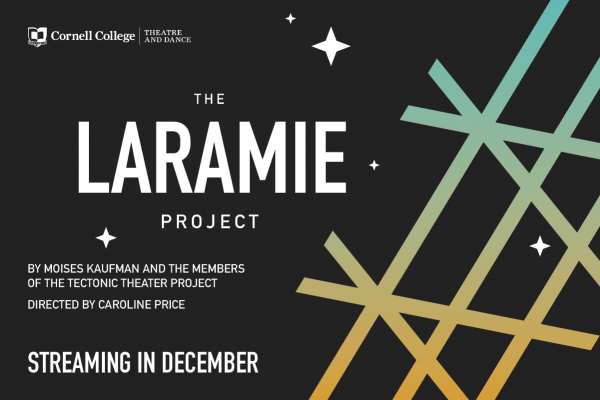 To register for this free streaming event, visit crnl.co/watch.

The show details the story of 21-year-old college student Matthew Shepard who was beaten, tied to a fence, and left in the remote Wyoming wilderness on Oct. 6, 1998. Days later, he died. Court proceedings revealed his murder to be a hate crime. Shepard was gay.

Drawing from court documents, published news reports, and personal interviews, “The Laramie Project” explores the depths to which humanity can sink and the heights of compassion of which we are capable.

Written by Moisés Kaufman and members of the Tectonic Theater Project, this production involves about two dozen campus and community members working under the direction of Cornell College Assistant Professor of Theatre and Dance Caroline Price. The cast brings together area actors, professors, teachers, parents, and Cornell College students.

“It has been a gift to have such incredibly talented people involved in this project,” Price said.

Following COVD-19 safety protocols, the cast and crew rehearsed this production entirely on Zoom, and filmed one actor at a time, with minimal crew, on the Cornell College Kimmel Theatre’s stage.

“When the pandemic hit it was a huge blow to the arts. We had to pivot as an industry and as a theatre department,” Price said. “Still, you can expect some familiar faces, incredible talent, and a story that still resonates today.”

Viewing is free, but registration is required for streaming.