The comics studied during this course, however, weren’t the traditional fictional superhero comics.

The pages of these comics were filled with real events–stories about topics such as crossing borders, what it’s like to be bi-racial, and life experiences of marginalized communities inside the U.S. Students read and analyzed sequential art that decentralizes history, politics, medicine, and the institution of academia through personalized stories.

“The U.S. comic market consumes superheroes nonstop, but these stories and these narratives, they also deserve the space in schools, in universities, and your bookshelf,” said Visiting Assistant Professor in the Department of Classical and Modern Languages Fernanda Díaz-Basteris. “We can use the comic form to tell stories that are not fictional, to tell stories that are happening to people.”

Díaz-Basteris is a comics scholar. She has spent the past six years reading, researching, and writing about nonfiction Caribbean and Latinx comics. She wrote her doctoral dissertation about Puerto Rican comics, disaster, and colonialism. Now she’s sharing her knowledge with students as they take advantage of the One Course At A Time schedule to immerse themselves in more than a dozen graphic novels, online comics, comics anthologies, zines, and more.

“I think it’s a fun, attractive way to learn about some topics that might make you feel uncomfortable,” Díaz-Basteris said.

Senior Cleo Sullivan, a sociology and anthropology major, took the course and said studying comics is a different way of taking in information that allows students to learn outside of traditional academic writing.

“I love seeing Latinx stories and voices being told to a larger audience, especially in such a creative way,” Sullivan said. “Through reading these stories, those of us in the class who identify as Latinx have gotten to share our identification with these stories and connect with them on a personal level.”

The class hosted several guest speakers, comics creators such as Maureen Burdock, Alberto Ledesma, and Rosa Colon visited Zoom sessions to talk to students about their creative and distribution process. Comics scholars and professors like Frederick Luis Aldama (Ohio State University), Ana Merino (University of Iowa), and Héctor Fernández-L’Hoeste (Georgia State University) visited the online classroom to discuss comic scholarship with students. Thanks to the office of Special Collections at the University of Iowa-Main Library, Librarian-curator Peter Balestrieri also joined the class and digitally walked students through one of the largest zine and comic collections in the U.S.

Throughout the course, students each read two graphic narratives and completed three creative assignments in which they created their characters and produced mini-comics and zines.

“Each week students embarked on the adventure of individual storytelling,” Díaz-Basteris said. “The results were amazing not just because they are putting into practice what they have read and analyzed during our sessions, but also because they materialize their emotions, concerns, and the concepts they have acquired previously.”

Díaz-Basteris is proud to offer this course and says Cornell is one of very few liberal arts colleges in the nation to include this field of study in the course catalog. She hopes students walk away with valuable lessons about important historical events inside and outside of the U.S. and the knowledge of using innovative digital tools to tell their own stories. 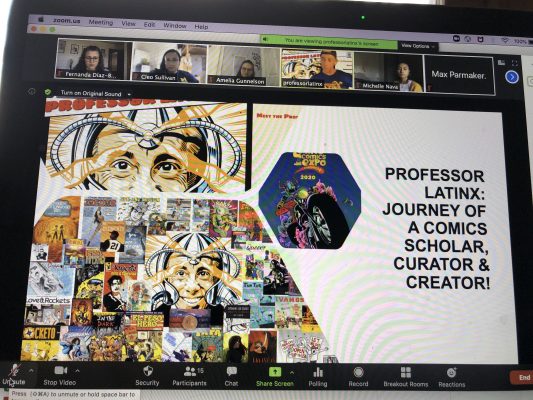 “I think the story-telling part of the class is what they will take with them forever–how we are capable of telling our story and why telling a story of a person matters. It can change someone else’s life. Telling the story makes the voice get a space,” Díaz-Basteris said.

Sullivan is thankful for a new understanding of this communication form and all the lessons she has learned during the 3 ½ weeks in the class.

“The biggest thing I have learned from this course is that stories can be told through many different formats, and comics can be used as a way to amplify those stories in an artistic and revolutionary way, especially the voices of those who have been historically marginalized,” Sullivan said. “Before this class, I never would have thought of comics as a method of activism.”