Rupert Kinnard ’79, today you are being honored with Cornell’s highest alumni award for your work as a longtime art director, activist, and creator of the oldest continuing black gay and lesbian comic characters in the U.S. 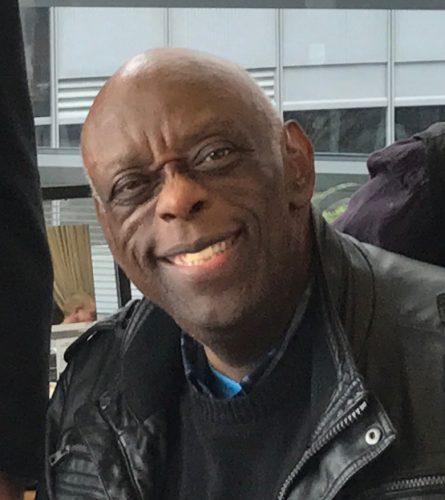 When you came to Cornell from Chicago, you had already developed a love for comics, especially those with superheroes. You have said that you came to realize that none of them spoke to your experience as a gay Black man. So you created the Brown Bomber, a black, gay superhero, while you were a student here. He appeared regularly in The Cornellian newspaper and prominently in the 1979 Royal Purple yearbook, of which you were the editor. You also served as president of Students for Black People, and as a popular DJ at the Cornell College radio station, KRNL-FM.

You founded the Rupe Group Graphics design firm and moved to Portland where you began making your presence known within the alternative media community, and your Cathartic Comics began appearing in the pages of Portland’s most significant queer newspaper, Just Out. Within your first year there as art director, you won the 1983 Gay Press Association Award for outstanding achievement in overall design. The Brown Bomber and his partner, Diva Touché Flambé, were syndicated in gay publications across the U.S.

Today, your work appears across the country and has been included in numerous anthologies and collections of work by Black and gay artists. Through your art, you have worked with Portland’s Black United Front, Portland Storefront Theater, PassinArt, Theater Group, the National Organization for Women, National Lawyers Guild, Cascade AIDS Project, the Workers’ Organizing Committee, Oregonians Against the Death Penalty, along with California Newsreel, Gay and Lesbian Press Association, National Lesbian and Gay Journalists Association, Oakland Tribune, and San Francisco’s Theater Rhinoceros. Two of your proudest achievements were receiving the Standing on the Shoulders Lifetime Achievement Award from the World Arts Foundation in 2013 and the Portland Monthly Magazine’s Light a Fire Lifetime
Achievement Award in 2019.

In recognition of your 40 years of dedication to social causes and your pioneering efforts to give a voice to the Black gay community, we are proud to present you with the 2020 Distinguished Alumni Award.