Jay Justin ’89, today you are being honored with Cornell’s Leadership and Service Award. This award recognizes the whole of your post-Cornell career, the highlights of which would stretch for many pages. 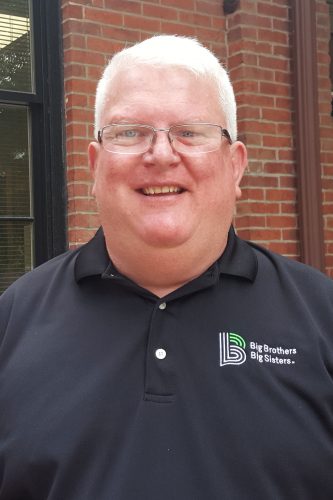 Since 2003, you have been the president and CEO of Big Brothers Big Sisters of the Mississippi Valley. More about your career in a bit, but first a little about your formative years at Cornell, the years you say lay the foundation for what was to come.

You were the second in a family of 10 children to go to college. During your time on the Hilltop, you encountered a wider array of people than you had ever met before. You found the small-college atmosphere conducive to meeting and making new friends and developing new relationships. You interacted with students from around the world, but you also learned to make friends with adults, something you say you’d ever really done before. Some of those professors and staff members have become life-long friends.

You worked in the admission office, where you did mailings, maintained a database and led tours of the campus. You played football and baseball, sang in the choir, taught Sunday school and joined the Gammas.  And, oh yes, you met your wife Mary Rokosz, Class of 1990.

It was at Cornell that Professor Craig Allen got you interested in environmental policy and encouraged you to pursue an internship at the Iowa Capitol working for the environmental committee in the house.  One Course At A Time allowed you to live in Des Moines and attend the entire session, during which they passed and funded a host of new environmental protection laws.

The year you graduated, you were the second-youngest ever elected to the Davenport City Council where you led the city’s environmental efforts. You then worked for U.S. Sen. Tom Harkin for eight years, leaving that position to focus on more local issues, especially those involving children. You then served as senior vice president at Junior Achievement before joining Big Brothers Big Sisters in 2003. You have been a Big Brother yourself since 2004. Your Little Brother is now a college graduate and a commercial pilot.

You serve on a number of local boards and committees, including the Regional Development Authority and the Camp Shalom Board of Directors and you are active in numerous other organizations including Little League, Junior Achievement, United Way Campaign Cabinet, Achieve Quad Cities, St. Paul the Apostle Church, and a local Rotary Club.

Your daughter, Caroline, is a member of the newly installed Class of 2024.