If you were looking for Cali Pfleger ’20 during her four years at Cornell College, you could likely find her deep in her geology studies.

When Cali arrived as a first-year student she thought pre-med was her path, but she quickly realized her plans needed to shift after a course with Professor of Geology Emily Walsh–Geology in the News: Natural Hazards.

“The small class size allowed us to really delve into the idea that geology really influences our daily lives,” Pfleger said. “After that class, I needed to know more about the world around us and switched to a double major in geology and environmental studies.”

She found a passion for research and started working with Professor of Geology Rhawn Denniston. The summer after her first year, she joined the work on his long-running research project that examines the chemical signals in stalagmites to understand climate change in Australia. She became invested in exploring as much as she possibly could. In fact, she expanded on that research during an internship at Woods Hole Oceanographic Institution (WHOI) following her sophomore year using climate modeling to study the connection between large volcanic eruptions and rainfall patterns in Australia. She also returned to the institution the summer after her junior year.

“I continued my research at WHOI, but as a Cornell Fellow,” Pfleger said. “In my second year, I expanded upon my previous paleoclimate modeling work while also learning new analytical techniques to detect sulfur in stalagmites.”

She said all of this research helped her learn the importance of asking questions, reading peer-reviewed research articles, and communicating her findings. When she wasn’t conducting research on climate issues around the world, she was working to do her part to create environmental change closer to home–on campus. She led a project to eliminate the use of the disposable to-go boxes at the Hilltop Café and replace them with reusable containers.

“This project is amazing and will have a great impact on Cornell’s carbon footprint and I am very excited that they will be expanding this program campus-wide next year,” Pfleger said.

Denniston said since he’s met Cali, she has been highly motivated to affect environmental change.

“As one of two students on the Sustainability Task Force, she almost single-handedly drove multiple initiatives to reduce waste on campus,” Denniston said. “But spending the summer before her junior year conducting climate change research with Dr. Caroline Ummenhofer at WHOI really lit a fire in her belly. Funded by our grant from the National Science Foundation, Cali learned a computer programming language and applied it to state-of-the-art computer models to examine how large, prehistoric eruptions impacted monsoon rains. The next summer, she returned to WHOI where she threw herself into a trio of projects. She dug deeper into her climate modeling, investigated ways to extract signals of past eruptions, such as sulfur, from cave deposits, and began developing a novel method to determine the exact timing of prehistoric volcanic eruptions using lake sediments.”

Ummenhofer agreed that Pfleger’s motivation was top-notch saying that the student researcher was highly motivated, driven, and relentless about exploring the volcanic signature in stalagmites and climate models.

“No lecture, seminar, or interaction with a visitor or faculty member would end without Cali coming back excited about an idea on how she could apply something she’d heard about to her own project, approach her analysis in a different way, or use a new tool or method,” Ummenhofer said. “And the best thing was that they were truly novel, creative ideas. She followed through and further developed those ideas by approaching colleagues at WHOI and other institutions. She has a great future in grad school ahead of her.”

Her research supervisors and all the geology faculty at Cornell know she will be a rock star at anything she pursues, and she already has big plans for her future. She begins the Ph.D. program at the Bren School of Environmental Science and Management at the University of California Santa Barbara this September.

“My biggest achievement while at Cornell was being able to start a research project my first year and then nurture it and have it grow into what is now my future,” Pfleger said. “It means the world to me that I was able to have the opportunity to conduct so much research as an undergraduate student.”

That research experience mixed with the leadership roles she took with the Women’s Soccer Team, Environmental Club, Geology Club, and Phi Omega, will, no doubt, set her up for success. 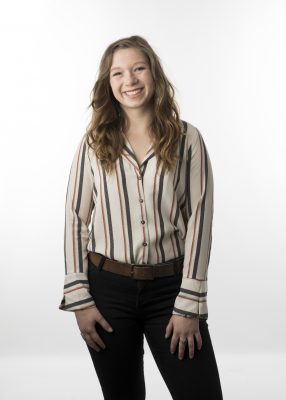 Favorite drink  Chai lattes! They were my “treat yourself” drink for the last four years.

What she’ll miss the most I will miss my geology friends the most. They are such a fun group of people to be around, but also will always take their academic classes seriously. I have been able to spend so much time with them over the last four years and they will always hold a special place in my heart.