Cornell College’s computer science major was established just months before Tony deLaubenfels arrived in 1983. For the next 37 years he helped build the program from the ground up, teaching 34 different courses himself. 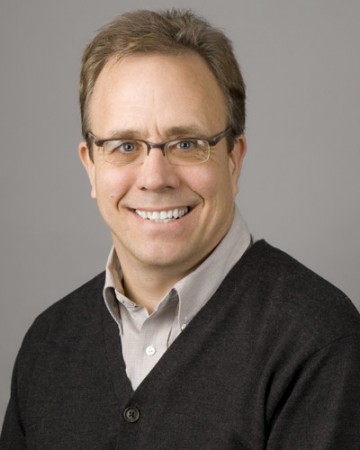 “Year by year, we added terrific courses to the major. In 1988-89 Jim Freeman and I were awarded an NSF grant for $140,000 for the Apollo network. In 1989, we hired Leon Tabak, the college’s first computer science Ph.D. faculty member. We had turned the corner,” he recalled. “In 1991 Cornell was the first Iowa college to join the internet, in 1996 we installed the campus network.”

For five years between 1989–1996, deLaubenfels served as director of Academic Computing. In 1996 he authored Cornell’s first successful proposal to the Mellon Foundation, receiving $300,000 for teaching with technology. That relationship has been fruitful ever since.

In 2000 the department moved into a renovated Law Hall and hired its second full time computer scientist. And in 2019 they moved into a fabulously renovated West Science Center.

The department sought to make the curriculum relevant with courses such as deLaubenfels’ Artificial Intelligence, Computer Networks, Parallel Programming, Mobile App Development, and Introduction to Data Science (the latter taught with Ann Cannon).

The course he worked the hardest to refine was Differential Equations, which also has the distinction of being the course where he experienced one of his most memorable  pedagogical moments. The class was meeting on the third floor of Law Hall and deLaubenfels was discussing harmonic oscillation and demonstrating the physical systems that were governed by differential equations—springs, guitar strings, and wine glasses.

“Suddenly, the whole building started to shake. Just a few seconds later, the psychology class that met on the fourth floor started pouring down the stairs. Yes, it was an earthquake, not a small one, and yes earthquakes are a classic example of a harmonic oscillator,” he said.

In retirement he and his wife Jill plan to stay in Mount Vernon for at least a few years. He plans to do some teaching and continue his consulting.

“I am a techie at heart, so I expect to continue to write code and to learn new technologies but will increase my time with my kids and grandkids,” he said. “Also, play more tennis!”

“One of my work-study jobs was lab assistant in the Teaching Technology Center. Tony was the project director and author for the grant that established the center. I benefited from being able to gain relevant work experience in the lab helping to solve technology issues for customers, which is still an aspect of the work I do today. It is amazing that Tony made it possible for professors to start incorporating technology into their classes in 1997 as we saw recently how COVID-19 made it necessary for classes to be conducted entirely through technology.” — Wendy Miller ’98

“Tony really brought the computer science industry into the classroom and made our education so much more enjoyable as well as applicable. I was able to use the things he taught beyond graduation, and I am so grateful to him for that.” — Sarah Gilliland Korth ’11

“Tony was the advisor to the Cornell College Computing Club that Sarah, myself and a few other students started and never batted an eye when we wanted to build a robot capable of controlling itself and shooting nerf guns at people or launching high altitude weather balloons off the Ped Mall. He was my advisor for my summer research at Dartmouth as well as the independent study I completed afterward and countless other projects and classes over the years. After graduation I always looked forward to our visits to Cornell and getting the chance to catch up with Tony about work, Cornell, and introduce him to our son.” — Luke Korth ’12