Exactly 164 years, to the day, that the cornerstone was laid for Cornell’s College Hall (July 4, 1856), crews will place the final stone on a large update to the building. 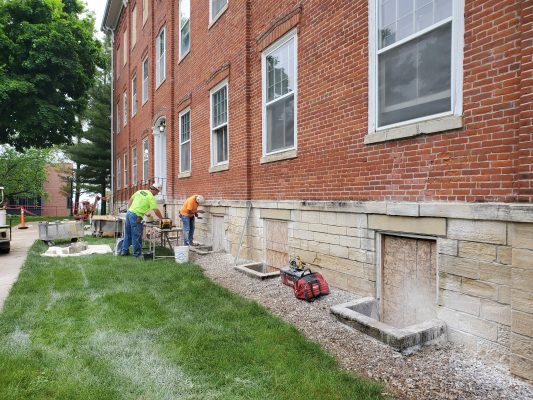 The college is reinforcing the foundation of College Hall by replacing the original stone lintels (the master stone that resides just above the lower level windows) that have cracked.

At the same time, College Hall (1857) and Old Sem (1853), the college’s two original buildings, are becoming more energy-efficient thanks to the installation of more than 150 new windows. Teams of contractors have been spending May and June replacing windows.

“This is a really neat adventure, having the capacity to preserve these beautiful structures and to understand the historic value of these buildings,” said Cornell College Project Manager Scott Ladwig. “This work helps preserve the legacy of these iconic buildings, not just for the campus, but for the entire community.”

The large-scale window project is part of a $5.9 million infrastructure improvement plan with Johnson Controls, which has its North American headquarters in Milwaukee, Wisconsin. The plan will reduce the college’s energy usage by 20%. 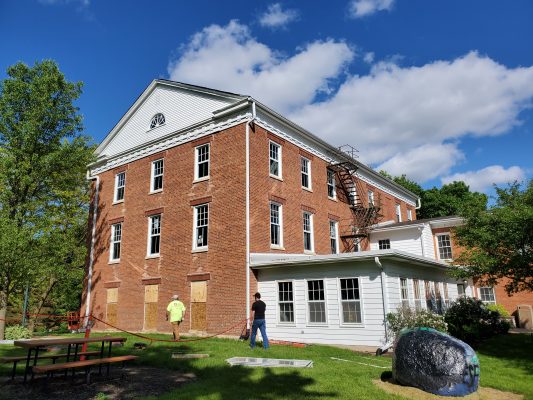 The agreement with Johnson Controls guarantees that infrastructure upgrades will produce savings that repay the company for project costs over time, which does not require any traditional loans. Instead, Cornell pays Johnson Controls based on measured and verified results through a funding structure known as contingent payment funding. As a result, the infrastructure improvements do not impact any of the college’s existing debt covenants or obligations.

Old Sem was the first building constructed on campus. College Hall was the second. As history goes, no architect was retained for the construction of College Hall. Instead, a committee consisting of faculty and trustees planned the project. Students also assisted in the construction by assisting the master craftsmen.