Degree: B.A. in sociology and anthropology with a minor in civic engagement

Alondra Jazmin (AJ) Granados-Diaz ՚20 struggled with bleak emotions initially during her first year at Cornell College. Living in Iowa, on a predominantly white campus far from her family back in Albuquerque, New Mexico, increased her sense of being alone. The challenge of being a first-generation (first in her family) college student and a person of color surrounded by white faces took a toll on her academics. She missed her family. She longed for the familiarity of place and culture that she had to leave behind for her pursuit of a degree and a dream of making a difference as an immigration attorney.

“At the time, I grew very depressed and was pushed into a black hole where I did not really know what to do or who to reach out to,” Granados-Diaz says. “I had gone from an environment where I was surrounded by my culture 24/7 with people who spoke my native language and had the same interests and had moved somewhere where it was very difficult to find foods, music, and other things I was familiar with. As I looked for help, I began to surround myself with people from the Latinx community and individuals who were different from me. This way, I was learning from new cultures but also learned to embrace my own and grow comfortable in my own skin and environment.”

This past May, Granados-Diaz graduated having achieved academic successes that demonstrate perseverance and grit. She poured herself into her coursework, held multiple jobs, and began to see her work ethic pay dividends. 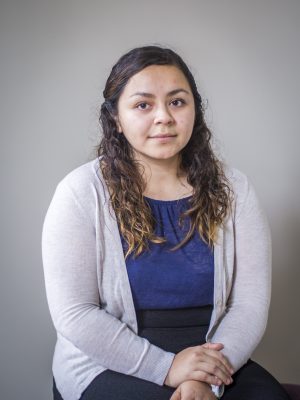 “I am the proudest of being academically successful and getting through my whole college experience,” she says. “Once I was initiated into both of the honors societies within my major I knew my hard work had paid off.”

Granados-Diaz holds membership in the Anthropology Honor Society and the Sociology Honor Society. She completed a Cornell Fellowship—the Arthur Vining Davis Fellowship in Legal Immigration Services—over the summer of 2019 with Kids in Need of Defense (KIND) in Baltimore, Maryland. She led two alternative winter break trips with the Office of Civic Engagement to Macon, Georgia, and Puerto Rico. Granados-Diaz interned with the Eastern Iowa Community Bond Project for two blocks during her senior year at Cornell.

“I fell in love with the humanity behind sociology and anthropology,” she says. “With the legal work I want to do with immigration, I felt sociology would help me understand the social structure that has shaped the laws around immigration and the perceptions as well. With anthropology, I knew it would allow me to develop skills that would aid me in my work with individuals from a variety of countries and cultures.”

Granados-Diaz got involved in campus life. She played on Cornell’s lacrosse team, which earned her Academic Honors from the Intercollegiate Women’s Lacrosse Coaches Association, and she earned recognition on the All-Midwest Women’s Lacrosse Conference Second Team.

Lacrosse Assistant Coach Hemie Collier says, “I have worked as an educator for almost 15 years, and AJ is one of the hardest working students or, people for that matter, I have ever come across. She is the epitome of what it means to be a student-athlete. She provided opportunities for herself and others around her to grow by being supportive and showing love whenever she could. It was a great honor to be a small part of her journey.”

She worked on the Diversity Committee and was not only a member of one of Cornell’s unique Greek organizations but was also on the Greek Council.

In addition to academics, Granados-Diaz felt her extracurricular activities made an impact on her college experience.

“I was able to be more directly involved with individuals who have taught me so much and would not have learned from otherwise if I was not involved with these groups,” she says. “They have not only pushed me to be a better person but have allowed me to explore different parts of myself I would not have otherwise.”

The academic, athletic, and student life successes she experienced while at Cornell places Granados-Diaz in a confident position to take on what comes next in her journey.

“These achievements really solidified the image I have of myself as a scholar,” she says. “Before I started my college journey, I did not know if I was going to make it because I had absolutely no guidance. After dipping my toes in the water, I realized how much I was capable of. These achievements are trails of my hard work and the beginning of my journey to become an immigration attorney.”

Granados-Diaz is taking a year off for financial reasons but keeping her goal of law school well in her sights by being one of 10 scholars in the Los Abogados Pipeline Fellowship Program which provides LSAT preparation, law school application support, and law mentors. She also has obtained a role as an immigration paralegal at The Americas Law Group in Mesa, Arizona.

She offers this advice to first-year students of color, “I would advise students to attend POC-led events on campus. Like BACO, Union Latinx, and begin to make those connections early on in their career. If they have lived in a very diverse city before coming to Iowa, I would also consider contacting a therapist early on to help get through the culture shock. Lastly, I would use Stoner House [home to Cornell’s Office of Intercultural Life] as a great resource. The people there are going to know exactly what you are going through and feeling. It is comforting to know people who have been in the same spot as you and already know where you can go get a haircut, get Mexican food, get soul food, and listen to some great music.”

Favorite spot The bench next to the library that looks down onto Ink Pond. It is relaxing and has a beautiful view.

Favorite food Orange chicken and the mixed berry green tea. They are very tasty and make my tummy smile.

What she’ll miss most The friends I have made during my time here.