An interest in the classic video game Asteroids for Windows 98 spawned a passion for computer science at a young age for Nicholas Adamou ՚20.

His curiosity led him to explore how video games, websites, and computers are developed. He spent hours watching video tutorials and reading about programming and web development. Adamou’s desire to figure out how things work naturally gave way to creating applications of his own for the computer.

“IBM has a world-class internship program and I am extremely grateful for the opportunity,” Adamou says. “I was privileged to work with a diverse and talented team on an important and relevant project. The internship not only challenged me but also has made me a more well-rounded engineer and individual.”

Adamou’s team worked on developing a piece of software called IBM’s Global User Interface Next Gen or “GLUING.” The software will replace IBM’s legacy ledger software, which required rewriting the entire program to be highly secure, stable, and efficient. Adamou didn’t see his internship as work.

“To me, it feels like I am going into a place where I get to use all of the fun CS ‘toys’ that I like to use in my free time,” he says. “Working on a team with an incredibly talented group of people and communicating our goals and progress was inspiring. I was able to see all of the aspects of the project and how it all comes together for a large company.”

Adamou’s IBM internship isn’t the only achievement he’s proud of accomplishing. His final project for the course CSC 311 Systems Software presented the interesting challenge of designing and constructing a system using the C programming language that efficiently manages load on a network, known as a load balancer. When millions of people are accessing an application at the same time—think of Twitter, Facebook, Instagram, and SnapChat—a heavy user traffic load has to be maintained.

The project required an immense amount of planning and organization prior to Adamou starting the coding that would be needed. In the end, the load balancer did what it was supposed to do in a functional and efficient manner.

“I am proud of this project because of the sheer amount of work and determination that it required to complete within a short amount of time,” Adamou says. “If it weren’t for the block plan, I do not think I would have been able to complete the project because I would have had to focus on other classes. As a transfer student at Cornell, I’ve had the privilege of studying under both the traditional course curriculum of five or more classes at a time as well as the One Course At A Time curriculum. Having experienced the challenges of both academic plans, I definitely prefer Cornell’s block plan as it allows me to focus on one specific class for 3 1/2 weeks. I believe this is more relevant to the rigors of the professional workplace that I’ve experienced during my internship experiences.” 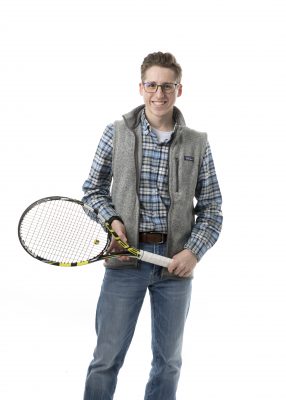 Adamou found that another benefit of the block plan is that it allowed time for him to play on Cornell’s tennis team, where he played third doubles and third singles, and to join Cornell’s Deep Water Club, a spiritual life organization.

“Nick is one of those athletes that you love having on your team,” Head Tennis Coach Peter Dumas says. “He always gave his best during practice and matches while maintaining a high level of academic excellence. Even though Nick was only a Ram for two years after transferring from Hartwick and his senior season was cut short, he had a large impact on his teammates and his coach.”

He also spent time reinvigorating the Cornell College Computing Club (C4). Adamou discovered that Cornell’s common schedule made sharing meals with his teammates and friends possible on a regular basis, fortifying his friendships. The process of procuring funds and rebooting the C4 Club taught him valuable leadership skills and his involvement with Deep Water and an off-campus organization called SALT fed his spiritual growth.

“Nick’s classmates saw his initiative and responded with their own ideas and energy,” says Professor of Computer Science Leon Tabak. “Nick organized activities for his classmates like those in which he had participated during two great internships. He shared enthusiasm and skills gained in Silicon Valley and at IBM.”

Adamou considers the adjustment as a transfer student a challenge but one that “ultimately, it took time and patience to adjust to my new life in Iowa, but I eventually found my niche, happiness, and success.”

Adamou starts his post-graduation career as a software engineer at IBM in Connecticut at the end of this month.

Favorite spot There are so many great places to study at Cornell, so it’s really hard to choose a specific place that is my favorite. However, if I had to make a choice I’d say the study rooms in the new Russell Science Center. These rooms are fantastic for not only individual study, but also for group studying. Additionally, you are able to write on all the walls with dry-erase markers. This makes it super easy to draw diagrams or do practice problems with a group or by yourself.

Favorite food When I visit Zamora’s to order something to eat, usually after a tennis match, I always get a Buffalo Chicken Wrap because they are really filling and taste great. However, it is pretty spicy, so I usually get it with Milk. At the Hilltop, the food is very good in general. My favorite meal was the orange chicken with white rice and spring rolls at the Global section. The lines for Global when they serve orange chicken usually wrap around the whole cafe!

Why he feels lucky My parents reside in Connecticut and I am the oldest child of three. My brother, Matt, is a junior civil engineering major at Clarkson University in Potsdam, New York, and is a member of the men’s soccer team. My sister, Lindsey, is a senior in high school and plans to study environmental engineering when she enters college this coming fall. My family is very close and we love spending time together, playing tennis and other games, hiking, and traveling. I feel really lucky to have a close-knit family to support me in life.

What he’ll miss the most There is a lot that I am going to miss at Cornell when I graduate in May, but I think I will miss playing tennis with my teammates the most. I have met and become friends with so many different people over the last two years either through tennis or through Deep Water and although I know we will keep in touch, I will miss seeing them day-to-day.