Jerome Savitsky, a longtime Cornell College professor of economics and business who was renowned for challenging students to think deeply and work diligently, died on May 28, 2020, after suffering a heart attack. 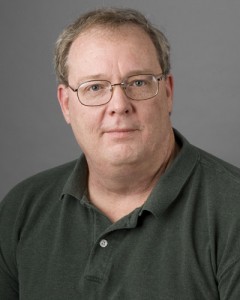 Professor Savitsky recently completed his 31st year of teaching at Cornell. He was 62.

“You knew him as a stern taskmaster and as someone whose often gruff demeanor hid a soft and caring heart,” wrote David Joyce Professor of Economics and Business and Department Co-Chair Todd Knoop in an email to majors. “Jerry held a real passion for getting his students to ‘think like an economist’ and believed that learning economics can change your life, because it did his. He wanted to share this epiphany with you in order to help you find your own passion in life—even if this passion had nothing to do with economics.”

“I learned a lot from Professor Savitsky. Not only did I learn about subject matter, but I also learned that putting in the time and effort will pay great dividends in life,” Sarah Tuma Carter ’07 told the Cornell Report magazine in 2012. “All economics and business majors know that the most difficult course you’ll take is Intermediate Microeconomics. The problem sets that Professor Savitsky hands out in this class are brutal. While we all obviously learn about economics with these problem sets, I think more is learned about how much work it really takes to get things done. Each student also learns how to produce good work in a pressure situation. The things I learned from Professor Savitsky are most definitely applicable to life in the working world.”

Savitsky brought rigor and passion to the economics classroom. His senior seminars integrated research, writing and empirical skills. His insistence on excellence motivated many Cornellians to pursue graduate studies in economics, business, and other areas. In recent years, as his interest in applied economics broadened, he developed popular courses in  the economics of sports and the economics of crime.

He firmly believed in the importance of economics in a business education and played a fundamental role in recent years as the college built business programs in finance, business analytics, and management. He chaired the Department of Economics and Business on multiple occasions and served the college as a member of most of the major academic committees.

His popular Economics of Sport class traveled to Dallas and met with representatives of the city’s professional sports teams, including his former student, Eric Sudol ’03, who previously led a staff of 20 at the Dallas Cowboys as vice president of corporate partnership sales and marketing.

Savitsky bought a home in Mount Vernon when he was hired and lived there for 31 years. His next-door neighbor was a stock car racer and Savitsky began assisting him, eventually becoming his crew chief and spending summers on the race circuit.

In 2002 The (Cedar Rapids) Gazette published a feature on him.

“The stuff that I teach, I try to develop my student’s problem-solving skills. It’s the same thing here. When the car is having a problem—let’s say it’s tight on exit—there are certain things you can do to solve that problem, but you don’t want to create problems in other places,” he told reporter Jeff Dahn. “You’re trying to work with other people for a common goal … Sometimes you have to give up on the goal of perfection for something that’s good, but you don’t have time to get it perfect.

“And working under pressure. I put my students under pressure to do a lot of work in a little amount of time, and that happens here.”

A Celebration of Life service was held Oct. 22 outdoors on the Cornell College campus.