Linden Miles ՚17 left the Hilltop with her B.A. in psychology and a Russian minor. She returned a year later to work at the Cornell College Eating Disorder Institute (CCEDI) under Professor of Psychology Melinda Green.

“I was thrilled that Linden Miles returned to our laboratory to accept a professional scientist position after serving as an undergraduate research assistant in our laboratory while she was a student at Cornell,” Green says. “It has been an incredible opportunity to see her flourish as a young scientist. She has done an amazing job for our laboratory and has had such a positive impact on the lives of our participants and our student researchers.”

Miles co-facilitates treatment groups, runs evaluation sessions, schedules participants, and oversees the undergraduate research assistants. She’s integral to the daily operations of the Institute’s research, which is funded by a grant from the National Institute of Mental Health. The three-year study is tasked with gathering data on 180 participants with the goal to reveal the most effective ways of treating eating disorder symptoms in women.

“The time management skills I gained from One Course At A Time have been very beneficial in my life after college,” Miles says. “I learned how to use my time efficiently in order to get tasks done quickly while still maintaining quality. Attending Cornell can be challenging from both an academic and personal perspective, but it is worth it. The experiences, friendships, and more I gained here as a student has made me who I am today and I like the person I have become.”

As an undergraduate, Miles grew interested in psychology as a means to understand human behavior. She saw the interconnected nature of the field of psychology with an array of other fields.

At the Institute, Green and Miles are testing the efficacy of investigating dissonance-based intervention, which in less technical terms means that researchers use questions that lead participants to confront how what they think about a topic doesn’t necessarily meet their own behavior, or what they think is logical doesn’t actually equate to what they are doing.

Participants spend three months moving into different phases. Psychological and cardiac measures are noted starting with baseline measurements to right after the intervention protocol and finally to a two-month follow-up. Miles assists with the data analysis and the additional grant research as well as running the Institute’s social media accounts.

“Self-affirmation Tuesdays and memes on Fridays,” she says. “I give them what they want.” She laughs.

Once the study completes its three-year timeline, the Institute’s researchers will have written papers and booked conferences to discuss the findings. And at that point, the Institute will be looking for the next grant to fund the next evolution to the current research, such as targeting specific behaviors like OCD or people-pleasing tendencies. Miles says the whole experience has been a confidence booster for her and solidified her desire to continue work in the field of psychology. 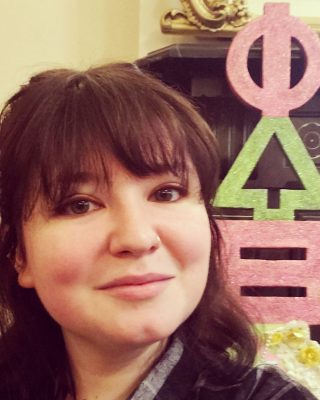 “It’s given me confidence in my role in these tasks,” she says. “To be able to do what I’m doing with just a B.A. solidifies that research and being a career psychologist is right for me.”

This summer Miles is training her replacement at the Institute because she has been accepted into a school psychology master’s and certificate of advanced study program back home in New York and her last day at Cornell will be at the end of July. Green says she will miss Miles greatly.

“It’s bittersweet to be leaving because I’ve loved what I’ve been doing and it has allowed me to grow so much as a researcher as well as provided me with such a strong foundation for graduate school,” Miles says. “I’m excited to see where the research goes next, even when I’m not directly involved anymore.”