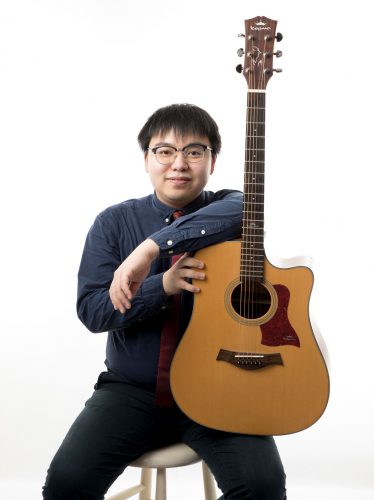 Before arriving in the United States to study music composition at Cornell College, Xikun Wang ’20 had no formal music training or music ensemble experience.

By the time he graduated in May with a bachelor’s degree in music composition, he had a solo part in the U.S. premiere of a classical masterwork, two of his compositions were featured in the Class of 2020 commencement, and he completed an internship writing music for commercial videos.

His next step: Deferring for a year, then graduate school at New York University in music composition for film scoring.

“Previously, my work focused more on popular music styles, using simple chord progressions with repeated melodies. Because it was simple, I would only listen to the resulting piece two or three times. My own work was not particularly interesting to me,” says Wang, who is from Jinan, the capital of eastern China’s Shandong province. “However, my professor changed my thoughts on composition. He worked with me on how to make each motive or movement more connected and how to make my short melodies longer. This series of big changes brought me to a whole new world of composition.”

Wang worked with the Berry Career Institute to line up an internship after his sophomore year at New Bohemian Innovation Collaborative in Cedar Rapids, where he composed music for commercial video and interview videos using computer programs.

“This is a wonderful experience in my college life,” he says. “I had many opportunities to talk and meet with professional producers. After this internship, I felt my communication skills and music composition skills both had a huge improvement. This is really helpful to me as a professional musician in the future.”

Wang quickly adjusted to Cornell’s One Course At A Time curriculum, saying that the 3 ½-week immersion in each class allows time for deep exploration of paper topics and readings. “I love the block plan. I think the block plan really helped me to focus on my studies,” he says.

Outside of class, Wang joined the Suyu Chinese Culture Club as a social media manager, which he says made his life more “colorful.” The members shared Chinese culture with the campus through fall and spring festivals. He also volunteered at a local church playing piano and guitar.

In his third year he was invited to play in the jazz ensemble, symphonic band, and orchestra playing guitar and percussion.

“As a composer, it is important to have experience in performing ensembles. These opportunities allow me to improve my comprehensive music skills, music appreciation, and instrument performance in a short period of time,” he notes.

In his senior year he had a solo in the Music Department’s performance of the U.S. Premiere of “The Flood, Requiem,” attended by the composer. Later that year he held a senior recital for the string quartet he composed, and the music department helped him hire professional string musicians to perform it.

“I gained a lot of knowledge when I rehearsed my string quartet with professional musicians. I learned to bravely express my ideas when they played the music differently than I wanted, to understand how performers read my music, and to consider the musicians’ suggestions,” he says.

His goals are to complete his education at New York University and bring his knowledge back to China, explore and blend Eastern and Western cultures in his compositions, and help Chinese music education continue to grow.

“I want to constantly jump out of my comfort zone with further education, exploring different musical styles, and analyzing the scores of different composers,” he says. “I am particularly interested in a blend of Chinese-style melodies with the harmony and structure of Western music. Sharing more understanding of world music demonstrates how the music culture of the East and West can create synergy.”

Wang has come far in four years, leaving a taste of his culture on the Hilltop and taking a wealth of knowledge and experience along with him.

Favorite type of music to listen to Chamber music like string quartets or woodwind quintets by Debussy, Mozart, and György Ligeti.

Favorite composer or composition I am a big fan of Beethoven’s Symphony No. 5 and Debussy’s String Quartet in F minor.