The Cornell Report magazine and its designer, Amy Belice Graphic Design, received a 2020 Communicator Award of Distinction from the Academy of Interactive and Visual Arts. The Award of Distinction is presented for projects that exceed industry standards in quality and achievement. 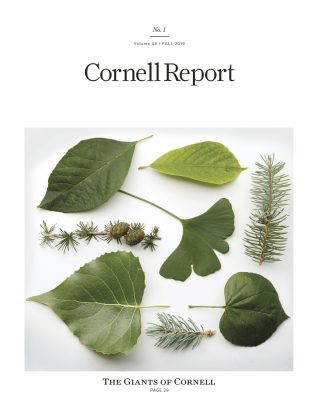 The fall 2019 Cornell Report—which featured an illustrated cover story, “The Giants of Cornell,” on the eight trees that stand out on the Hilltop—received the award in the Marketing/Promotion subcategory of the Design and Print category. Amy Belice has designed the magazine for three years. “The Giants of Cornell” was written by Lisa Gray Giurato with photography by Envisage Studios. Professor of History Catherine Stewart contributed “An Existential Tree-tise,” imagining what the eight trees might tell us if they could speak.

Dee Ann Rexroat is the editor and Gray Giurato is assistant editor of the magazine.

The Communicator Awards is the leading international awards program recognizing big ideas in marketing and communications. Founded nearly three decades ago, The Communicator Awards receives over 6,000 entries from companies and agencies of all sizes, making it one of the largest awards of its kind in the world. 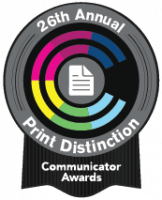 The Communicator Awards honors work that transcends innovation and craft–work that made a lasting impact, providing an equal chance of winning to all entrants regardless of company or agency size and project budget.