When Seattle became an early hotspot for the pandemic, John Wilkinson ’90 found himself suddenly in charge of helping provide temporary medical facilities in the greater metro area.

As a superintendent for Prime Electric and a 22-year veteran with the company, he is overseeing eight temporary sites. “Five of those are already housing victims and the others will be ready by the end of this week and next,” he said by email on April 14.

This is part of a series of stories on Cornellians responding to the COVID-19 pandemic. 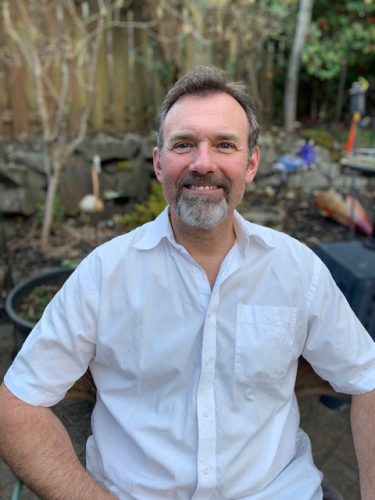 Prime joined forces with other trade unions to bring nearly 1,000 hospital beds to the area by adding temporary trailers and large tents to vacant lots and soccer fields and retrofitting existing buildings. Wilkinson said that prior to the outbreak, Prime Electric had nearly 700 electricians in the greater Seattle area. After the state’s stay-at-home initiative was implemented and job sites started to shut down, they dropped to 150 electricians in the field, with almost 100 of those working on the temporary site locations.

“With the speed at which the state, counties, and cities have been moving to get these sites built, it has created a situation where our site foremen have been putting in place a power system without any prints. We are providing power needs on the fly, meaning we can’t wait for plan review through the counties and local jurisdictions. To add to this, we see changes coming from those jurisdictions on a daily basis,” he wrote.

“Some days are one step forward and two steps backward, but at the end of the day we keep pushing through because we know we are helping someone’s family member somewhere.”

Wilkinson moved to Seattle after graduating from Cornell College and began his career in the restaurant industry, becoming an executive chef in downtown Seattle. He left that industry after his first child was born. That’s when a friend recommended the electrical union.

“Never in my wildest dreams did I imagine I would become an electrician. As it turns out, it was the best decision,” he wrote. “The rewards of working in a local electrical union for the last 25 years has been unbelievable. I may not have gone the direction of my American history and art majors I received at Cornell, but Cornell gave me the tools I needed to be successful at whatever I decided to pursue, including being a union electrician.”

And lately, he said, those rewards are immeasurable.

“Knowing that we’re doing something for the greater good and providing a place that may just save someone’s life is worth every minute and knowing that all this work is being done by union contractors is nothing but a bonus,” he wrote. “The union construction industry is not only helping by building these sites, but it’s also providing a paycheck to hundreds of families that would otherwise be out of work at this time. Pretty Cool.”

How are you responding to the COVID-19 pandemic? Contact us to share your story, or alert us to other Cornellian’s responses.