Cornell College junior Riley Sullivan always knew she wanted to be a writer.

She assumed she’d take a lot of English and creative writing courses once she arrived on campus since she planned to make it her major. As part of the core curriculum, Sullivan took what’s called a W course, which is a course that satisfies a requirement as a writing course, but it wasn’t in the English department; this W course was in the Religion Department with Professor Steven Sacks. The course—Magic and the Occult—was her very first of many religion courses and soon, Sullivan added religion as her second major.

Sacks says Magic and the Occult challenges students to assess and understand the place of rational inquiry relative to areas of human experiences and civilizations which resist reason, both as matters of intellectual and anthropological history stemming from the Reformation and Enlightenment, as well as a practical exercise of asking how and why we might evaluate and understand the worlds of facts and experiences.

“I loved it so much I’ve taken every magical course with him since and enjoyed every minute of it,” says Sullivan. “Now when I write about magic and pagan spiritualities, I feel really confident in what I’m writing and giving it the thought and depth it deserves even in fiction. Besides, Steven Sacks is such a character, how could I not have a class with him? For anyone who has yet to take a religion course I cannot recommend him enough.”

The respect is mutual. 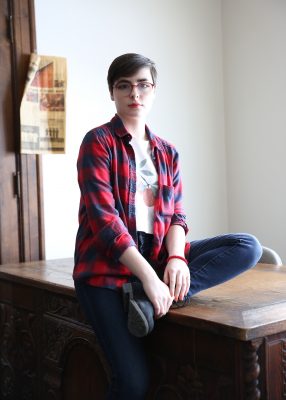 “Riley embodies the ideals of our department for our students,” Sacks says. “Riley has forged an independent path within the liberal arts, with an emphasis upon connections between creative writing and magical practices of early Celtic religion and culture, and has worked to build her educational experience in her own image. Our department has recently reconceived our major in order to facilitate the work of students like Riley, who are talented and self-directed, to create a portfolio of skills and experiences that reflects a liberal arts experience over and above the confines of our disciplinary conceptions of a religion major.”

Sullivan writes speculative fiction but she relies on a significant amount of research in order to bring a realistic and authentic tone to her writing even if it takes place in an otherworldly setting. She credits her progress on her novel to Professor of English and Creative Writing Rebecca Entel’s NaNoWriMo course—her novel is now a 35,000-word draft. NaNoWriMo occurs every November and many writers across the world participate in the challenge to generate 50,000 words. Entel understands the work that goes into publishing a novel and is a good mentor for Sullivan in this regard. Her novel “Fingerprints of Previous Owners” took her six years to complete and publish.

“In timeline, intensity, and ambition, the model [of NaNoWriMo] aligns with the block plan,” Entel says. “The generative model serves many pedagogical purposes: writers learn to push onward without having all the answers for their books, which is essential for novelists to be able to do, and writers learn the discipline of writing every day and meeting short-term goals, which is essential for the completion of long-term projects.”

Sullivan says she’s been trying to write her novel for years, and Entel’s course is what pushed her to put her words down and to make significant leaps forward. Without Entel’s class, Sullivan thinks many of her ideas about what she wanted her novel to be would still live only in her head.

The flexibility of the block plan allows Professor Entel to set aside long blocks of time for her students to write without distractions or other obligations intruding, which is a writer’s dream. Entel brings in alumni and local writers to share tips and participate in write-in sessions on campus. Entel says that students of the course leave with more confidence in their abilities and develop more discipline to tackle big projects. She also says that students often express how meaningful it is to them to work on projects they’ve been thinking about for years, just as Sullivan did.

“Pick courses you enjoy,” advises Sullivan. “It helps no one if you begrudgingly go to a class every day that you hate. And don’t be afraid to speak up.”

“If you fail, fail confidently, because when you’re corrected and then go on to succeed, you retain that information so much better and actually progress.”

Some spectacular advice from a Cornellian whose goal of having a novel published is certainly making a lot of progress toward making her publishing dreams a real—and not a speculative—reality.