The Cornell College music department will be singing a new tune for the 2020–21 school year as it welcomes new directors for its choral and instrumental programs.

Joe Dieker, Vice President of Academic Affairs and Dean of the College, will step down from his position and transition into the role of professor of music and director of instrumental ensembles.  The college will also welcome Christopher Nakielski as assistant professor of music and the new choral director.

Dieker and Nakielski will continue building on the good work and tradition of excellence in music Lisa and Martin Hearne have accomplished during their time at Cornell as the couple moves into retirement. Excitement is building as the new team looks to showcase the talents of Cornell students in the community and energize the music education curriculum. 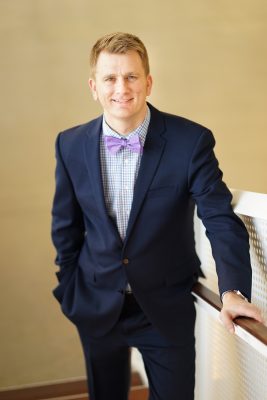 Music is something that has been in Nakielski’s life from the very beginning. In fact, his father toured with a “bubblegum pop band” that produced the hit song “Yummy, Yummy, Yummy,” in 1968.  His father also played in a 10-piece horn band that opened for many popular acts based in Milwaukee, Wisconsin from the late 1970s until the early 2000s.

“As a little kid, I got to spend my days backstage with the likes of Elton John, Bruce Springsteen, The Doobie Brothers, The Temptations, and all these different acts, with whom I had no idea who they were. Looking back, it was a neat experience to see my dad play.”

But the Milwaukee, Wisconsin, native never planned to get into music himself. He didn’t touch a musical instrument for 17 years. Then, his high school friends decided to start a band. Nakielski would play the piano, which meant it was time to start taking lessons.

While that band never saw the light of day, the itch to create music carried over into his education at Ripon College where he received his undergraduate education.

“When I got there, I auditioned for choir and they told me I was a tenor,” Nakielski said. “I was like, is that bad? What is that? They said just go sit over there and sing with those people.”

The rest is music history.

He went on to receive his master’s and his doctorate. Throughout his career, he’s taught at the high school and college level.

“I think my teaching style is to get in the trenches with my students,” Nakielski said. “I try to always empathize with them and understand what they are experiencing. I think I can do this, probably more easily than other professors, because I started my music career so late. I’m very close to what it was like to begin as a musician in late teens and early 20s–how to deal with things such as stage fright and sight-reading music at a later age.”

He’s eager to get students out and about in the community, putting their skills to good use and making Cornell well-known for its music education program.

“Teaching is a wonderful profession,” Nakielski said. “I absolutely love it. I love helping students become great teachers. I think I have a fresh way of teaching students to become high school teachers because I’ve been there. I would like to add that I like bringing the realization to students that they can do it all. They can perform while they are teachers–in their summertime they can go on tour. They can do so much.”

Nakielski toured with his own rock band, Ben Ripani Music Company, whose music made it onto an episode of “90210.”

“I have a great deal of respect for musical theatre and rock music, especially because I was brought up in that type of household,” Nakielski said. “I really feel it’s important for students to experience all styles because if you want to make it as a professional musician, you really have to be able to perform every style convincingly. I do feel it’s also important for students to have experience of a masterwork, such as a Mozart Requiem Mass or something of its equivalence, at least once every other year, if not every year.” 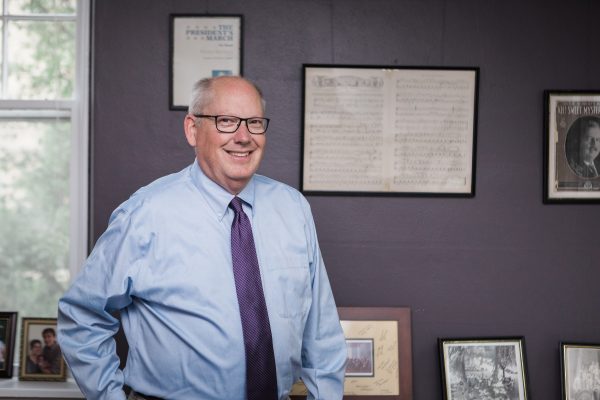 Joe Dieker will work closely with Nakielski as he takes on his new role with the college, and Dieker says he’s ready to get back full time to what he loves–music.

“It’s going to be really exciting to go back to teaching students and conducting the orchestra and band rather than conducting faculty meetings,” Dieker said with a smile.

Dieker says he wants to put a strong emphasis on showing off what Cornell students can do.

“At small colleges, the fine arts can be a really vibrant part of the community,” Dieker said. “We are going to do more to celebrate the fine arts, to create a buzz about it, and to let the world know about it. We have so many great things happening in the arts at Cornell College,” Dieker said.

Dieker was a college music professor and orchestra and band director for 24 years prior to shifting into an administrative role as dean. The Portland, Oregon, native went to Warner Pacific College for his undergraduate where he started his teaching career. He continued his education at the University of Oregon and finished with his doctorate at Arizona State University.

Dieker has been teaching clarinet students since he arrived at Cornell in 2010. Now he’s ready to add more students to his roster and recruit prospective students to take part in the evolving program.

“Working with students is always fun, Dieker said. “At small colleges, you have the opportunity to teach a disparate group of students of different backgrounds and interests. Bringing them together to form an ensemble that sounds really good is a challenge, but it’s also exciting and provides an amazing opportunity for students to learn together and make great music together.”

The music department will celebrate the retirement of Lisa and Martin Hearne with a joint concert by the Cornell Orchestra and Concert Choir. Solon High School and Cedar Rapids Kennedy High School choirs, both directed by a Cornell alumnus, will join Cornell students on stage for the end-of-the-year performance. That takes place Friday, April 17, at 7:30 p.m. in King Chapel.