Bradshaw inspired by meditations on, in nature

Bradshaw inspired by meditations on, in nature

Cornell College Junior Natalie Bradshaw walks in the footsteps of many well-known writers who turn to nature for inspiration and reflection.

Prize-winning author Rachel Carson, who was a marine biologist, wrote the influential book “Silent Spring,” which led to the creation of the Environmental Protection Agency. Annie Dillard’s famous meditations on seeing nature up close in “Pilgrim at Tinker’s Creek” won her the Pulitzer Prize. And of course, who can forget Henry David Thoreau’s “Walden, or Life in the Woods”? For her part, Bradshaw is finding her place in the world, in the wilderness, and at Cornell through immersive and focused studies in both English and creative writing and environmental studies.

Bradshaw took Professor Leslie Kathleen Hankin’s off-campus studies course, Literature and Arts of the Wilderness, and spent a fall block at the Wilderness Field Station in Minnesota, which is on Low Lake in the Superior National Forest, within walking distance of the Boundary Waters Canoe Area Wilderness. Hankins has the class read Thoreau and contemporary women writers like Terry Tempest Williams.

Hankins says “The most important aspect of the course is to open up the wilderness to the arts, the spirit, and to the differently-abled, so we can all carry some wilderness with us in our lives forever.”

She’s been fine-tuning the course for over a decade, taking advantage of the block plan’s flexibility.

“All the reading, journaling, photography, and exploring effectively cleared my head of the junk I’d piled up and gave me a better understanding of my connection to the world,” Bradshaw says. “There was also a lot of introspection and meditation worked into the class, which you usually don’t see in a normal learning environment, but you really should. Plus, who doesn’t want to look up at night and see all the colors of the Milky Way and read about the wilderness while you’re on a wilderness retreat disguised as school?”

She credits the consistent connections made while studying on a schedule like One Course At A Time with providing her with the type of educational experiences that fit her learning style. She doesn’t have to balance her time between multiple classes or feel pulled from multiple directions. She has the space and time to focus.

Another influential course Bradshaw took was Professor Rebecca Entel’s NaNoWriMo course, where students take on the challenge to write daily with discipline in order to generate a novella-length work. While taking this course, Bradshaw began to see her own writing potential. She says writing that intensely and focused forces you to be creative with your ideas and your time.

“My writing went to weird places in that class, but I think that’s what you want,” Bradshaw says. “I got to experiment with different methods and styles of writing, and I can tell how much my work benefitted from that block.”

Bradshaw thinks the surprising advantage of studying at Cornell is that the studying itself is constant. When she’s taking an English course, she is immersed in reading and the dissection of the literature she’s reading to the point she doesn’t really leave that mental space. She says you begin to make connections between what you’re reading, what you’re writing, and what is going on in the world around you. This is a common and most cherished phenomenon among writers.

“Whenever you make those connections it’s really exciting because you start to see a narrative unfold all around you, and what you’re learning in class becomes grounded in reality,” Bradshaw says. “The most important thing I’ve learned since being at Cornell is what environments I succeed in and, conversely, what environments I struggle in. I know now that I do well in environments where I always have a task at hand, always have an objective, and can discuss the things I’m passionate about with others. The block plan forces you to sort out your own personal obstacles so you can focus on what provides the most success.”

Bradshaw has not finalized her post-Cornell plans yet but one thing is for sure, she’s going to bring with her an intense desire to connect with the world around her, meditate on it, and use it to inform her work. 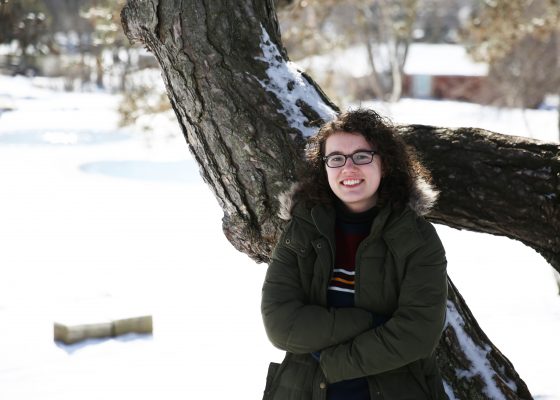 “I think whatever I do will have to include research,” she says. “Whether it’ll be writing, interpreting or collecting data, or returning to academia, I don’t know. I’ve always said my life goal is to be a hermit out in the woods, but I think I’d like to see more of the world before I go cabin-hunting.”