The giants of Cornell

The giants of Cornell

Shares:
By Lisa Gray Giurato, with photos by Envisage Studios

Trees have served as inspiration, myth, and symbols throughout recorded history in literature, in music, and on screens. There must be a reason we are so drawn to the towering giants. They must speak to us somehow, maybe on some unconscious level. Research indicates that simply being in a tree-dotted setting physiologically changes us, reducing our blood pressure, and bringing us a sense of well-being.

We’ve selected the eight trees that really stand out on the Hilltop. Take note and when you visit,  make sure to take in Cornell’s giants.

Note: On Aug. 10, 2020, a derecho damaged many of the Hilltop’s trees but most of the giants remained standing. So far only the magnolia was lost.

Professor of History Catherine Stewart visited each of our eight trees and wrote “An Existential Tree-tise,” imagining what they might tell us if they could speak. Her words appear with each tree. 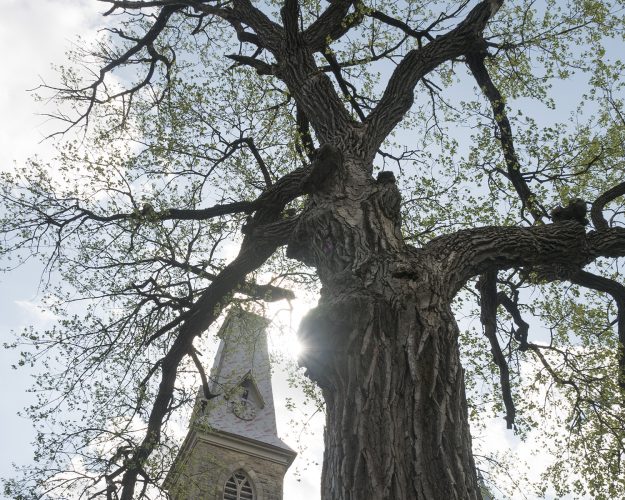 Identification: Cottonwoods have an open and spreading crown with simple (one blade), alternate spacing, toothed, and triangular leaves. The bark on young trees is smooth and grey-green in color, while older trees have bark that is deeply furrowed with long ash-grey ridges.

Known for: Growing fast, upwards to 100 feet. Native to Iowa and is often used as a windbreak tree and as lumber. 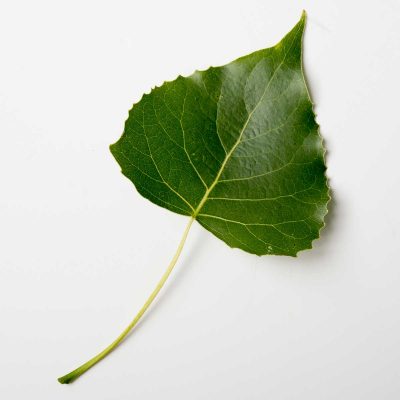 I am young and old at once. 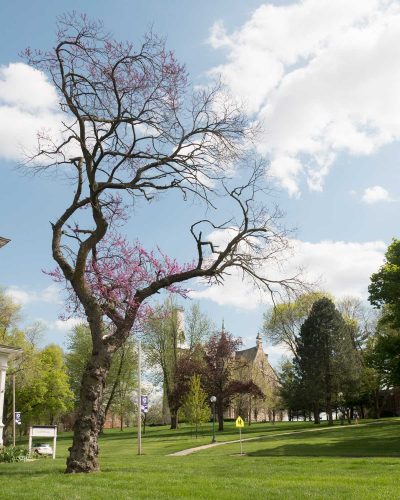 Identification: May grow in a rounded shape, but has irregular branching that in the winter when the limbs are bare can make the redbud a bold standout in the landscape. Rosy pink flowers bloom in the spring transforming the tree. The flowers eventually drop, leaving behind heart-shaped leaves.

Known for: Attracting early-season butterflies to its blooms. Songbirds eat the seeds and many a bird or mammal will nest in a redbud. George Washington was known for his love of this North American native and spent many hours in his garden planting redbud seedlings. 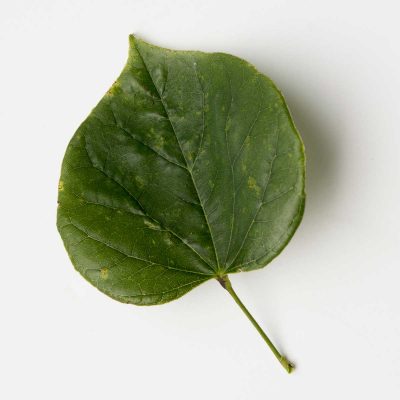 Knots of love and defense. 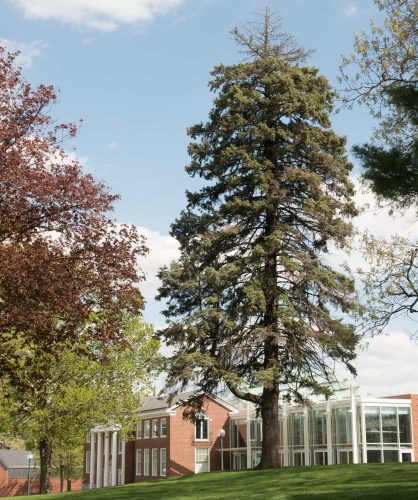 Botanical name: Picea pungens.
Locations: Martin Luther King Jr. Memorial is west of King Chapel. A second blue spruce that has been noted for its size is in front of Armstrong Hall.
Identification: The blue spruce has a pyramidal shape with horizontal, dense branches with sharp blue needles. The bark is silver, grey, and brown with vertical scales.
Known for: Providing homes to wildlife in the winter. 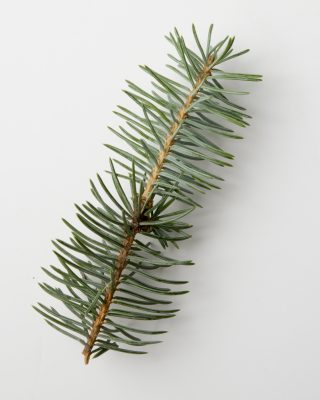 to assist you
with time travel

if you look long enough,

and breathe in the elixir of its scent. 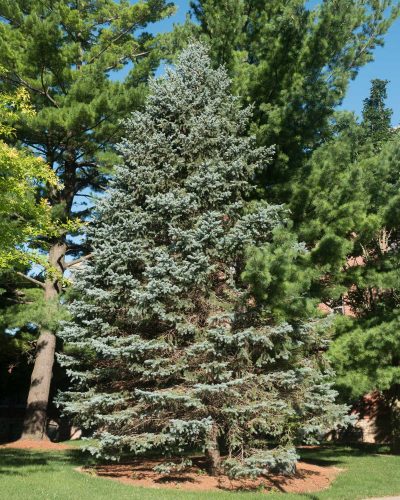 The blue spruce known as the Martin Luther King Jr. Memorial Tree was given to Cornell by the Students for Black People. It was planted in 1978, the 10th anniversary of King’s death. Sadly, it was vandalized. Rupert Kinnard ’79 recalls this time on campus.

“It was very depressing to know there were people on campus who would do that,” Kinnard says, “It happened a number of times, and we kept replanting it.”

Today, a nearby rock with a plaque adorning it, notes the placement of the King Memorial Tree.

“We have come to the point where we are able to say to those who will even use violence to block us, we will match your capacity to inflict suffering with our capacity to endure suffering,” King said when he spoke in Cornell’s King Chapel in 1962. “We will wear you down by our capacity to suffer, and one day we will win our freedom.” 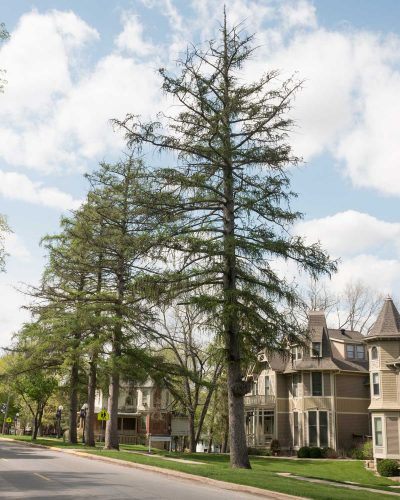 Location: Along the street in front of Scott Alumni Center.

Identification: A coniferous tree that loses its clusters of flat and soft needles in the winter. Tall and straight central trunk with spreading branches. Bears small spherical cones.

Known for: In Iowa, they are often used as striking barriers around a farmstead. 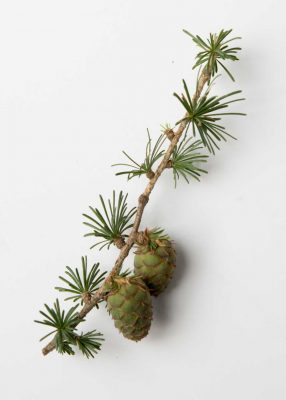 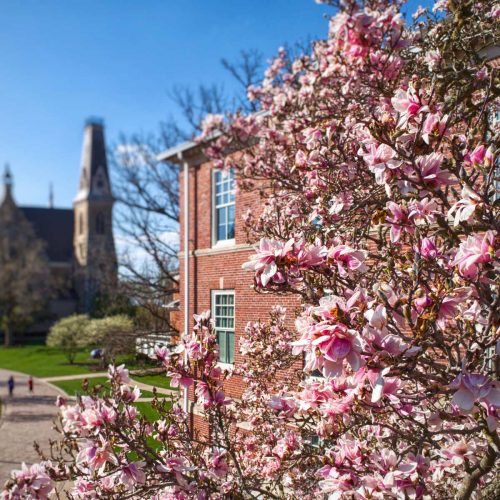 Location: At the Ped Mall entrance to Law Hall.

Identification: The magnolia near Law Hall is most likely a saucer magnolia, which can be identified by its pink-white tulip-like flowers that bloom before the leaves appear. Saucer magnolias tend to be compact with low branches. The leaves are oval with a pointed tip.

Known for: Being an ancient species of tree that appeared before bees. The flowers enticed beetles resulting in pollination. Today there are 210 different species of magnolia. Perhaps because of its beauty, the magnolia tree is frequently held up as a symbol that is referenced in music, literature, film, and television.

Cornell history of the Magnolia

The deciduous beauty was planted in 1936 to honor the memory of Biology Professor Harry McCormick Kelly who died the same year. Kelly taught from 1894 until a few weeks before his death. Kelly was an architectural design and landscape specialist, and he assisted in supervising the construction of Alumni Gym (now McWethy Hall), Carnegie Library (now Norton Geology Center), Law Hall, and the reconstruction of Old Sem after the 1924 fire.

The magnolia has had many admirers over the years. Laurel Presnell Upshaw ’50 wrote to the editor of the Cornell Report in 2016 to speak of her own admiration for the tree’s beauty.

“I do not, at age 88, plan to visit again, but I loved the photo of that gorgeous deciduous magnolia,” Upshaw wrote. “Ms. Nama Lathe had us sketching it, in bloom, in 1946, and I still have those nice sketches.” 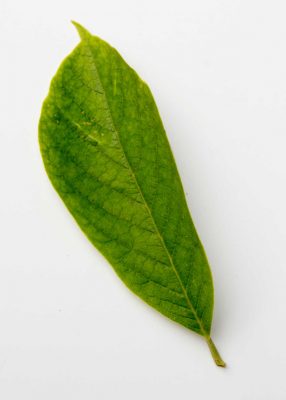 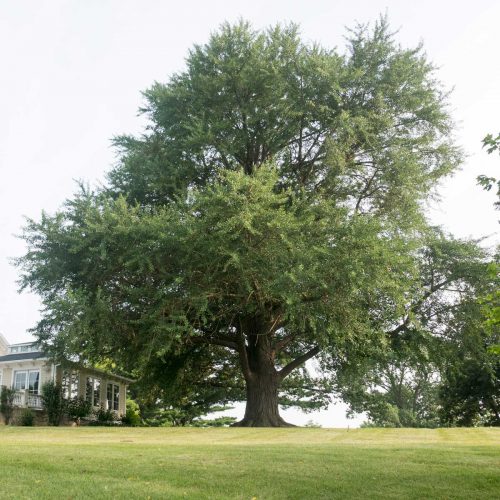 Identification: Ginkgos are pyramidal in shape and have a wide-spreading canopy. The fan-shaped leaves are bright green in the summer and golden in the fall.

Known for: Surviving the extinction that all other species in the division of Ginkgophyta met. The ginkgo is considered a living fossil. Fossils outlining the distinct fan-shape of the leaves date back 270 million years. In the fall they drop all of their leaves in a short period of time.

Cornell history and mythology of the Ginkgo

The ginkgo that stands near Garner President’s House is older than Cornell itself. At one time this ginkgo was dubbed a “State Champion tree … the largest reported of [its] species in the State of Iowa” by the Iowa Conservation Commission. A list of the largest trees in Iowa is no longer kept, but we believe ours is still the king of ginkgos.

Perhaps it is the ginkgo’s nickname, the maidenhair tree, that sprouted the unusual myth surrounding this ginkgo. As the distinctly Cornellian myth goes, women combing their hair under the ginkgo on a moonlit night will have their wishes come true. And, as an added bonus, if they do so while using a mirror, they will see the face of their beloved in the mirror’s reflection. 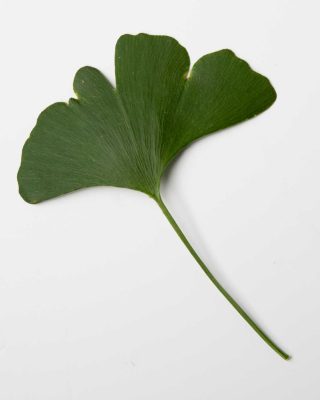 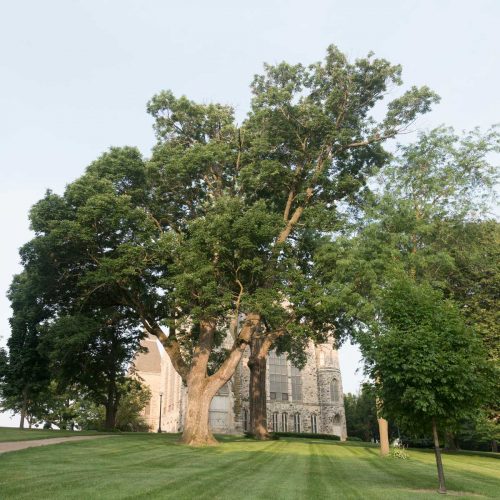 Location: Downhill from King Chapel and next to the great Cottonwood.

Identification: White ash is native to Iowa and is the largest ash species in Iowa with a pyramidal shape and a rounded crown. The leaves are compound with five to nine leaflets that turn bright yellow in the fall.

Known for: Being used to make baseball bats, furniture, and even fuel. Unfortunately, the white ash is susceptible to the emerald ash borer, which is not native to North America, but now that the species is here, has proven to be a deadly pest to the ash trees. Trees attacked by the insect tend to die within one to three years. Cornell’s ash trees are treated to protect them from the insect. 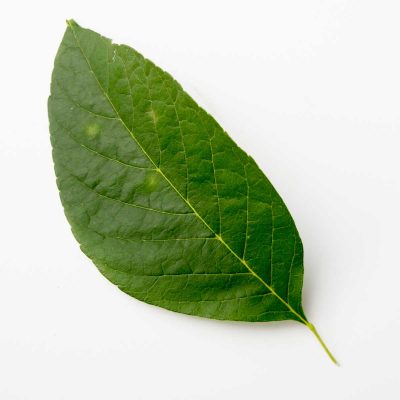 The Shillinglaws ensure a future for Cornell trees

A well-known children’s book written by Dr. Seuss speaks to our connection to the trees and their importance.

It was the Lorax in the story who attempted to save the trees from being decimated by the industry titan, the Once-ler. It is said that Dr. Seuss’s fable was inspired by a Monterey cypress, a tree native to certain regions in California.

Trees can do that for people. They inspire. Sometimes, they inspire people to give of their own resources and to be a Lorax for the trees. Tom Shillinglaw ’67 and Betsy Beers Shillinglaw ’69 speak for Cornell’s trees. Since 2008 they have generously funded hardwood trees and shrubs through annual gifts, and now they have endowed a fund, granting future generations of students many moments in which they can be inspired walking the tree-lined Hilltop.