Cornell is proud to acknowledge the outstanding accomplishments of Richard Kraig ’71 by awarding him the Distinguished Achievement Award. Following is his award citation, read during the Alumni Convocation at Homecoming 2019. (Come back soon for a video of the ceremony.) 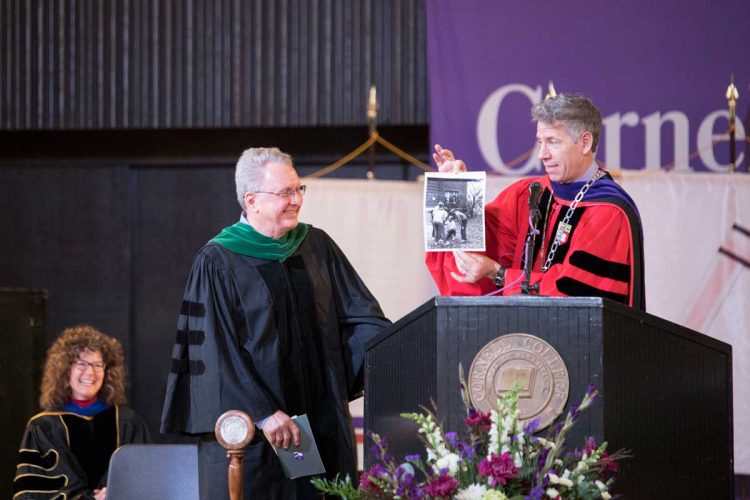 Dr. Rich Kraig, Cornell was the launchpad for your distinguished career as a physician, scientist, scholar, and mentor. During your undergraduate days, you concentrated on independent laboratory research working closely with professors Addison Ault, Truman Jordan, and William Deskin. In addition to your academics, you worked two jobs in The Commons and played intramural football.

After leaving Cornell, you earned a doctorate in physiology and biophysics at the University of Iowa and then a medical degree from New York University. You did a residency in neurology and joined the faculty at the other Cornell’s medical campus in New York City.

You are an active clinician-scientist, focusing both on migraines. Your research centers on deciphering how increased exercise and creative thought can protect the brain against neurological disease. Your research has led to numerous international patents and the formation of a biotech company whose mission is to translate your discoveries into ways to alleviate the suffering of migraine patients. You are truly one of that vanishing breed of academic physicians who are equally accomplished in the lab, at the bedside, and teaching students.

Over the years, you have returned frequently to the Hilltop to talk about science and medicine, and your work in particular. In addition, you have been an active participant in the Cornell College Dimensions Program. Since 2007, 10 Cornell students have conducted research at the University of Chicago under your guidance, focusing on how physical, mental and social activities can lessen the impact of neurological disease. Your collaboration with Cornell students has helped them understand the intricacies of deep scientific research, inspired them to careers in service to humanity, and for some has led to publication in scientific journals as undergraduates. Your partnership with Cornell faculty has helped them be better teachers and mentors for their students.

In your own words, you came to Cornell with a thirst for “what was next” but few skills in how to select, groom, and amplify this ambition. Cornell was instrumental in guiding you to a life-long adventure in pursuing new knowledge and trying to find out “why.”

Dr. Rich Kraig, because of your commitment to science and medicine, your unceasing efforts to bring comfort to the afflicted, and your ongoing support of Cornell, its faculty, and its students, we are pleased to recognize your efforts by honoring you as the 2019 Distinguished Achievement Award recipient.