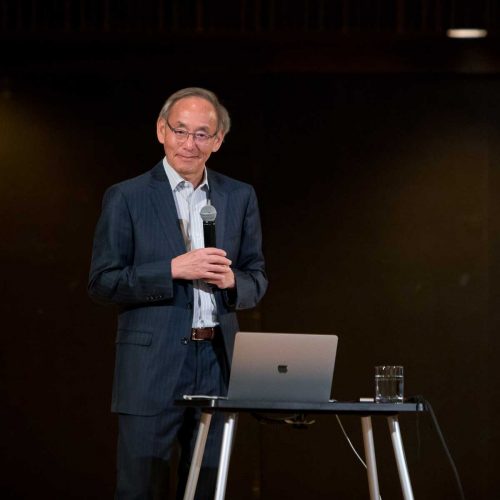 President Jonathan Brand introduced Chu, whose talk coincided with the college’s $35 million Science Facilities Celebration, and said, “This may be the most important central issue of our shared time on Earth.”

Chu began by laying out the scientific basis for climate change, which he noted is not scientifically controversial. Atmospheric carbon dioxide concentrations are rising because of the burning of fossil fuels, and this, in turn, is causing our planet to warm. He then moved on to showcase the effects: melting glaciers, rising seas, more frequent heat waves, and stronger hurricanes.

Chu argued that no single solution exists to solve the problem of climate change, but instead it must be attacked from many angles simultaneously, from the production and storage of clean energy to the development of plant-based meat substitutes to decreasing the growth of world population. To illustrate how quickly society can adopt technological solutions to environmental problems, Chu recounted a story from New York City in the early 1900s. Horse manure was covering the streets faster than the city could remove it, but within a little more than a decade, the automobile had almost entirely replaced horses throughout the city. Chu argued that once the environmental costs of climate change are fully accepted, the same market forces that drove the rapid transition from horses to cars can lead us to a more sustainable future.

He ended the talk by showing a photo of Earth taken from Apollo 8 in 1968.

“The astronaut said, ‘We came all this way to explore the moon and the most important thing is we’ve discovered the Earth.’ It’s pictures like this that put us in the proper perspective,” Chu said. “People say we need space exploration because we can go to Mars after we’ve trashed this planet. No. Look at that beautiful Earth. It’s not too late, but it’s getting later and this is the only place we have to go.”