As U.S. foreign service officers, Edgar Thornton III ’80 and his wife, Debbie, have accepted some of the most dangerous assignments available—in conflict zones in Afghanistan and Pakistan, Liberia during the Ebola crisis, and Jamaica during hurricanes. 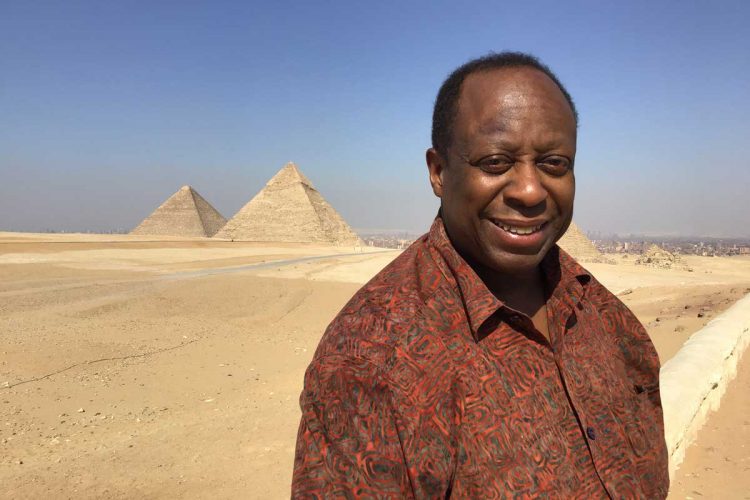 “My wife and I are kind of daredevils. We have worked in places that other members of the foreign service did not want to go,” Edgar said during a phone call from Abuja, Nigeria, where they presently work. “We have not only taken those assignments willingly, we have learned from the experiences and been able to establish close relationships not only with our colleagues in the embassy but with members of the community. We find this work very rewarding.”

Of all their destinations, which also include South Africa, India, Sri Lanka, Kenya, and Mexico, he said their work in Liberia during the uncertainty of the Ebola outbreak and in Jamaica during hurricane recovery was most satisfying. Depending on their location, they have implemented programs in infrastructure and electricity generation, economic development, health care, education, or agriculture.

Edgar followed his sister, Madgetta Thornton Dungy ’64, Cornell’s first female African American graduate, to the Hilltop and majored in politics. His career began in support of federal, congressional, and state political campaigns across the country as a staff member of the Republican National Committee and the National Republican Congressional and Senatorial Committees.

“We worked for Republican politics and traveled to nearly every state,” he said of himself and his wife. “As 21- and 22-year-olds we got in and met governors and state senators. We were thrust into situations early on where we were able to talk to anybody, at any time, about anything.”

He worked in New Mexico for 10 years, as chief of staff of the environment and safety division at Los Alamos National Laboratory and then as deputy cabinet secretary for the New Mexico Environment Department. During that time he and his wife started a retail flower business that eventually had three retail locations and a contract supplying Whole Foods Market. He then worked as a Native American tribal environmental consultant, followed by a move to Iowa for a short time as a higher education administrator.

In 2010 he returned to foreign service to serve in Afghanistan at the height of the war, embedded with armed forces in Kandahar Province and at the U.S. Embassy in Kabul.

The couple is in the process of returning to Jamaica for Debbie’s next post. Edgar recently retired and now works as a U.S. Agency for International Development contractor. Once they both retire they plan to renew their flower import business.

Asked about his greatest accomplishments, Edgar reflected first on his personal life. He and Debbie have two children, Meredith, 26, and Edgar IV, 22.

“I am really proud of the fact that I was lucky enough to meet my wife,” he said. “It has been a 30-year marriage and the nature of our relationship is a major accomplishment. She’s my best friend.”