In the early ’80s Aleta Grillos Trauger ’68 earned a reputation as a tough prosecutor. In the ’90s she became a pioneer among women federal judges. But before that, she wanted to be a classics professor. 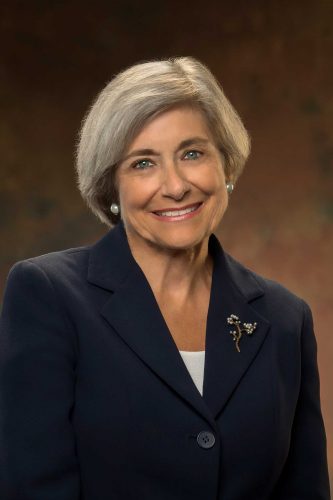 She grew up appreciating ancient history, had a proclivity for languages, and worked hard to earn scholarships for a college education her parents couldn’t afford. One day Terry Gibson ’59 arrived at her Denver, Colorado, high school recruiting students to Cornell College.

“Terry came to our house and promised my very old-fashioned Greek father that they would take good care of me,” she says. (Years later Gibson, then a Cornell vice president, recruited her again—to serve as a Cornell Trustee.)

Trauger arrived on the Hilltop to study classics but after a year was dissuaded by Cornell’s classics professor, Charles Milhauser. He told her there were few jobs in the field and men were always hired first (this was 1965). After graduating with a degree in English and earning a master of arts in teaching at Vanderbilt University, Trauger taught for several years before entering Vanderbilt’s Law School. She received a first-year clerkship, rare at the time, and continued with her firm part time throughout law school, joining full time after graduation.

Two years later she was recruited to the U.S. Attorney’s office, where she asked for criminal cases. This led to the case that would make her career: In 1981 she and a partner successfully prosecuted former Tennessee Gov. Leonard Ray Blanton for selling liquor licenses to political friends. The case received national attention and earned her a reputation for being tough.

With three defendants represented by multiple lawyers, Trauger was the only woman working the case.

“Every time the judge wanted lawyers to approach the bench or enter his chambers, he would say gentlemen. After several weeks of this, I hung back one day in chambers and I said, ‘You know, judge, I don’t know if you realize it, but every time you address all the lawyers, you say gentlemen. I got no response, so I said, ‘You could say counsel.’ Again no response, so I slunk out. Finally, after several more days, he switched to calling us counsel.”

After reentering private practice she found herself with another opportunity for public service, this time with newly elected Nashville mayor Phil Bredesen.

“Phil asked me to be his chief of staff. After Nashville’s previous mayor left under a cloud of allegations of unethical conduct, he wanted to send the message that this was going to be a squeaky clean administration,” she says. “Having the Blanton prosecutor as chief of staff, he thought, would do that.”

She left that position when she and her husband, Byron Trauger, adopted a baby and she stayed home to care for their child. Eighteen months later she was appointed to the bankruptcy court, and in 1998 she was confirmed by the U.S. Senate as the first female U.S. District Judge for the Middle District of Tennessee.

Among her notable decisions, she says, are a recent ruling that blocked the state from suspending the drivers licenses of people unable to pay court costs, as well as her ruling that Tennessee must recognize the same-sex marriages of couples legally married out of state.