Ryan Deaver ’13 says the beginning French he learned at Cornell gave him an edge when applying to the Peace Corps. Even better, he says, is the fact that he can communicate with more of the human race. 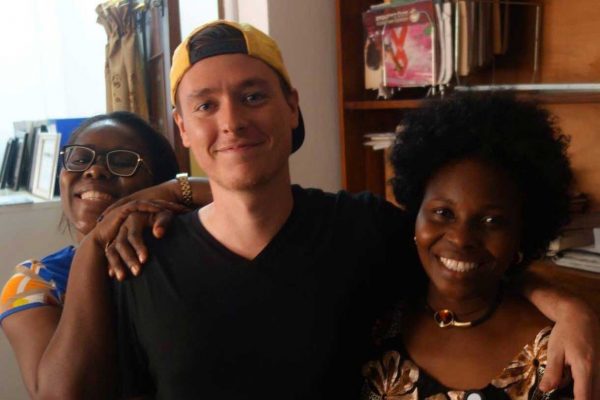 He says learning a second language is a privilege that gave him the ability to understand aspects of more peoples’ experiences. “Basically, it’s made me a lot more empathetic,” he says.

Deaver especially enjoys the ability to understand local culture through the context of language. An example he shared was the expression “… au bord de la voie,” which translates to “… at the side of the road.” In France that might mean the person was standing beside a street. In Benin, the French-speaking West African country where Deaver was a Peace Corps volunteer, there is only one paved highway, and a great deal of commerce takes place along that singular artery, so the meaning is different.

When his counterparts in Benin used the phrase, he says, “They were saying that they were mingling in the market, exchanging lengthy salutations with friends and family members, taking care of business deals, and haggling for food to bring back home to their families for the week—in short, they were implying that they were busy and would likely continue being busy for some time.”

Deaver majored in biology at Cornell and earned a master’s degree in biology from Western Illinois University in 2015. He now lives in Washington, D.C., where he is an environmental scientist at the Environmental Protection Agency.

He no longer speaks or reads French daily, but says he draws constantly from the lessons he learned when living in a francophone country.

“One great benefit of speaking French is that it helps me to make inferences about the etymology and meaning of new words,” he says. “Also, I read a lot of francophone news media, particularly from West Africa. Being able to read news from around the world written from different perspectives definitely helps me cut through the biases surrounding past and current events.”

His advice to students beginning their language education is to seek out opportunities to engage with native and proficient speakers.

“There is no substitute for real-life practice,” he says.