If you ever find yourself in historic Santiago de Compostela, Spain, you might bump into Cornell College graduate Maggie Ryan ’13. It’s a great place for Ryan to live.

At Cornell, Ryan was a double major in English literature and classical studies. Since she’s moved to Spain, Ryan has traveled throughout Europe, loving every moment spent traveling.

“My long-standing interest in all things ancient naturally draws me to places with Greek and Roman history,” she says.

Ryan considers her off-campus courses in classical studies to be significant to opening doors to her desired future. She learned to think and live outside of the box. Ultimately, her time experiencing the world beyond the safe boundaries of a textbook laid the foundation for her current path—teaching English in rural northwestern Spain. 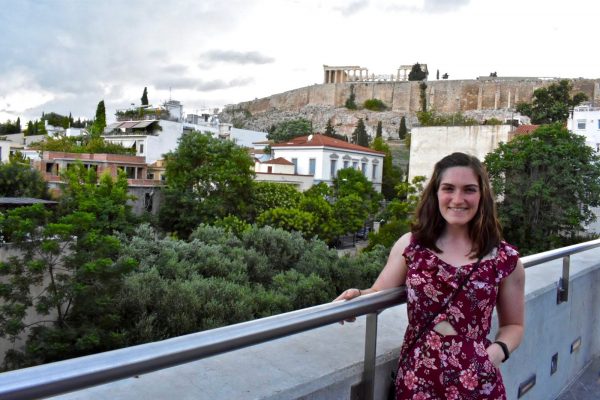 In addition, Ryan says she honed her critical thinking and writing skills by fully immersing herself in the material she studied.

“Whether it’s rehearsing a play in Latin, analyzing Sapphic poetry, or discussing the social class structures of Roman society, your brain is constantly challenged to think in new ways with each course,” Ryan notes.

“I left Cornell with a much broader mindset and the lasting impression that people around the world are more similar than we think, whether they live halfway across the globe or in texts from thousands of years ago.”

To some, the idea of studying an unfamiliar language can be daunting. Ryan approached the task with enthusiasm and grit. She knew that having a background in languages just might come in handy one day. Studying Latin gave her a deeper understanding of the structure of the English language, which in turn has improved her ability to teach English as a foreign language. Ryan’s choice to study Spanish has also been an incredibly useful decision now that she lives in Spain.

Whether you’d classify yourself as an experienced world traveler, or a sufferer of wanderlust, Ryan’s advice to students may inspire you to follow your passions:

“If you’re doubting whether or not to sign up for a certain class, just do it!”