Cornell College students are already playing on their new competition soccer field, but the beautiful new field didn’t get that way overnight. 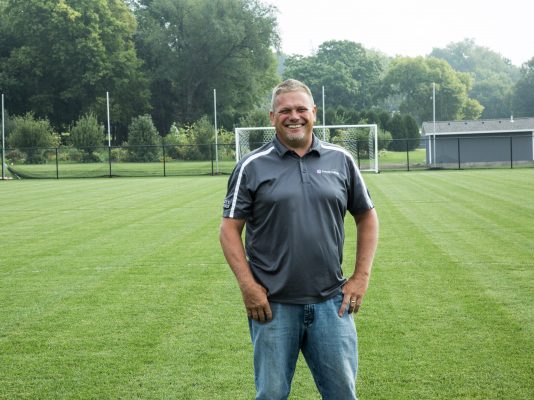 It took a lot of work, and the man with the plan for making it happen was Maintenance Worker Charlie Trachta.

“From June until the season started, I would say I was on the field working almost every day,” Trachta said. “I keep a record on my calendar. You can see there are not many days without something written on them.”

He’s just like a proud parent–watching and caring for the field and marking its progress along the way.

“It’s five months old now,” he said. “From a landscaper’s point of view, that’s pretty incredible to play on that.”

Trachta was in charge of the most important piece of the field–the grass. Without the grass, there could be no games. He recalls the exact date the field was seeded, May 15, and the date the grass started growing–May 22.

He also remembers the day when he could mow it for the first time.

“When we first cut it, the first day, I came in and told Facilities Project Coordinator Cari Morgan, ‘Well, it was baby’s first haircut today,’ Trachta said with a laugh. “She asked me if I took some of the clippings and put them in a plastic bag for a keepsake.”

He nursed the field along each and every day.

“I kept track of the different things I did on a daily basis, like how often I watered it, cut it, sprayed fungicide, and fertilized it,” Trachta said.

Trachta worked all summer to make sure it was ready for the return of the men and women’s soccer teams.

“I was super nervous when the students were coming back,” Trachta said. “I wanted it to look the best it could and be the best it could. That’s who I do it for–the students who play on it. I want them to have a college experience and to have this new field, and it’s pretty cool to give them that.” 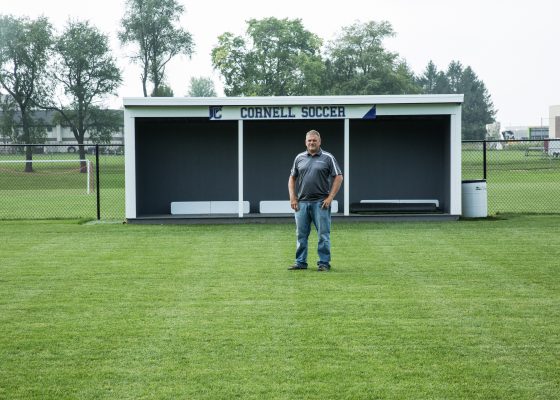 And the work isn’t over yet. He’s still mowing the field before every game, painting the white lines every couple of weeks, and watching it closely to see if he should turn on the sprinkler system to keep the field soft for play. With 22 years of landscaping experience under his belt and seven years of grounds work at Cornell, he’s enjoyed every minute of caring for this new soccer field.

Now that all the grass is in with the drainage and irrigation systems, crews are adding the final piece–the restroom facility. As the finishing touches are added, he’s taking notes on everything the players and coaches say about the new field.

Seeing them get on the grass for each game makes him smile every time.

This project is possible because of a lead donation from Cornell College Trustee Jan Thomas ’80,  her husband Gary Doernhoefer, and their family. Life Trustee Lee Swanson ’60 and his wife, honorary alumna Jacqui Swanson, as well as Trustee Scott Simmer ’73 and his wife, Peg Schoen, also contributed to the project.