Knowing how to speak Spanish has opened doors for Gabie Campbell ՚18.

She works as a trainer at Epic Systems, which has its headquarters in Verona Wisconsin, and additional offices in Finland, Saudi Arabia, the Netherlands, Australia, Denmark, the United Kingdom, Singapore, and in the UAE. Epic Systems develops software used in a variety of healthcare settings, in patient’s homes, and on their phones. Campbell assists with translation projects. 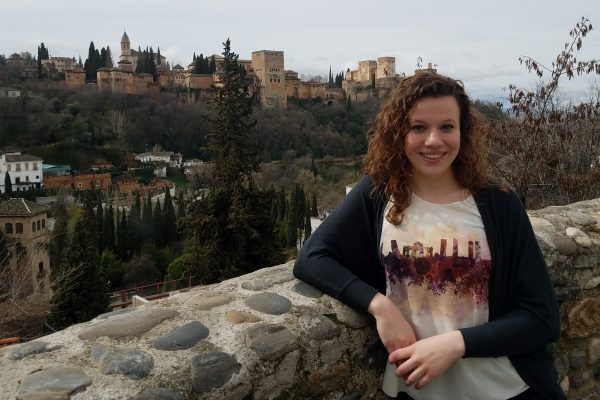 Her Spanish speaking skills led her to join a Spanish conversational group enabling her to meet new people and make new friends. She doesn’t always use her ability to speak Spanish on a daily basis but she does live near a large Spanish-speaking population and has found it helpful to be able to understand the language that she commonly hears.

“Plus, I can jam out to the Latin Top 40 station on the radio,” Campbell says.

Campbell was a double major in biochemistry and molecular biology and Spanish with a minor in chemistry. She remembers practicing her Spanish while walking around the Hilltop. She’d talk to no one in particular, just out loud to herself, testing her grammar skills and her memory of Spanish vocabulary simply by describing what she saw on her walks.

“I think one of the most interesting and unexpected skills that I gained from studying Spanish was better communication in English,” Campbell says. “When I was unsure of how to say something in Spanish, I would often have to find other ways to describe what I was trying to say. Through practicing this kind of thinking, I am now better able to explain concepts in English as well, especially to ESL speakers. I also have a much deeper understanding and respect for Hispanic culture after taking nine years of Spanish classes.”

Her advice to students considering studying a language is to follow in her footsteps, literally. Walk around campus trying to describe in the language you are learning what it is that you see and hear around you. As long as no one is within earshot of you, no one will know if you’re getting it right, except for maybe the Hilltop’s squirrels who might just hang on every word that comes out of your mouth, hoping you’ll drop some tasty snacks for them to eat.