Kayla Johnson didn’t just learn a lot about performing during her summer Fellowship at Creede Repertory Theatre (CRT) in Colorado, she also learned a lot about herself. 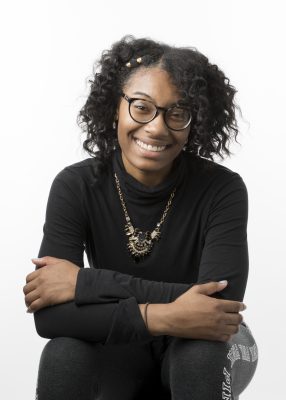 The sophomore, who plans to major in theatre and chemistry, took on a whirlwind internship at the theatre for 14 weeks as a Cornell College Fellow. Creede has hosted eight Cornell theatre interns since the program was established and is still supported, by Bob Slater ’60 and his wife Dixie. It was one of the original host sites for the Fellows program in 2005.

The theatre holds seven to ten shows each summer, and Johnson started acting alongside professional actors from all over the country from day one of her internship.

“The rehearsal process for the shows that I’m in had a rehearsal time of about two weeks, before a couple days of tech rehearsal and then on to opening,” Johnson said. “These were probably the shortest amount of time that I’ve ever had to rehearse for a show, so at first I was very intimidated and scared. But working alongside professionals really empowered me and pushed me to not give up and give 100% at every rehearsal.”

Johnson performed in “Little Shop Of Horrors” as Chiffon, was the understudy for Colleen in “Ripcord,” and took on the roles of Molly, Smee, Captain Scott, and Teacher, in “Peter and The Starcatcher.”

Johnson said she was amazed and grateful she landed this internship. She decided to audition after getting an email from Assistant Professor of Theatre Caroline Price.

“I saw that there were only four open roles that were needed and that this was a countrywide audition call,” Johnson said. “When I emailed Caroline back, that I’d audition, I didn’t really think that I’d even get called back because this was a professional theatre, and I hadn’t done any theatre since high school. Caroline helped me with my audition video, she filmed for me, and helped me with my musical piece and monologues. She was very patient and helpful, and I can’t thank her enough.”

In addition to acting in a variety of shows during her summer Fellowship at Creede, Johnson was assigned a mentor who offered advice, support, and even networking contacts. This young actress also met with experts who taught her how to build a website to promote herself, how to do taxes as an actress, how to create a stand-out resume, and how to audition on video.

“My biggest take away from this experience is that no matter what profession you go into, you’re going to have to work really hard, and you have to find the strength within yourself, more than once, in order to keep pushing yourself to be better than you were yesterday. In the end you will be rewarded with more opportunity, friends, and a newfound love and respect for yourself,” Johnson said.

Johnson, a Kankakee, Illinois, native, has many memories and new skills to carry with her as she continues to live out her acting dreams at Cornell College. She now knows she has to believe in herself more than ever to achieve her goals.

“Everyone at CRT has shown me what success is, and I’ve learned that it’s different for every single individual on this planet,” Johnson said. “My biggest challenge has been believing in myself. I have a great support system back home, at Cornell, and here at CRT where people always tell me how proud they are of me and how they believe in me. But all of that means nothing IF you can’t see what everyone else sees, and for a while, I couldn’t and I am still working on it, but my confidence in that aspect has definitely improved.”

Johnson will give a presentation on her internship to the Cornell community during the Nov. 20 Cornell Fellows Showcase. It starts at 5:15 p.m. in the Thomas Commons.

Cornell Fellows is the college’s premier opportunity for high-level internships and professional mentoring, organized by the Berry Career Institute. Approximately 20-25 students participate in fellowships across the United States and internationally each year. Cornell Fellows are engaged in hands-on projects throughout the eight-week fellowship, complete at least one academic credit, and receive financial support to offset costs associated with housing, transportation, food, and supplies. Students can apply for opportunities at existing Cornell Fellows sites or request funding to support an internship at a new site that they propose.