Nobel Prize winner and former U.S. Secretary of Energy Steven Chu will speak on “Climate Change and Innovative Paths to a Sustainable Future” as the next Delta Phi Rho Lecturer at 7 p.m. Thursday, Oct. 24, in King Chapel on the Cornell College campus. The public is invited.

Free tickets, available through Eventbrite, are required for entry to the event.

– NOTE: NO TICKETS REMAIN FOR THIS EVENT –

Chu, the William R. Kenan Jr. Professor of Physics and Professor of Molecular & Cellular Physiology in the Medical School at Stanford University, was invited to campus in honor of the completion of Cornell’s $35 million Science Facilities Project. The college has doubled its STEM space with the construction of the four-story Russell Science Center and renovation of West Science Hall and two floors of Law Hall to house STEM studies.

This is the eighth Delt Lecture funded by Cornell’s Delta Phi Rho Centennial Endowment. Previous speakers include Thomas Friedman, Doris Kearns Goodwin, Bob Woodward, Fareed Zakaria, and George Stephanopoulos. Delt alumni created the series to contribute to the intellectual capital of the college and the community. 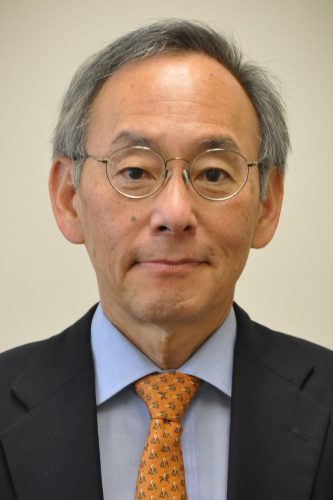 Chu was the 12th U.S. Secretary of Energy, from January 2009 until the end of April 2013. As the first scientist to hold a Cabinet position and the longest-serving Energy Secretary, he recruited outstanding scientists and engineers into the Department of Energy. He began several initiatives including ARPA-E (Advanced Research Projects Agency–Energy), the Energy Innovation Hubs, was personally tasked by President Barack Obama to assist BP in stopping the Deepwater Horizon oil leak, and initiated in 2010 the annual Clean Energy Ministerial.

Chu has published over 280 papers in atomic and polymer physics, biophysics, biology, batteries, and other energy technologies. He holds 15 patents and an additional eight patent filings since 2015.

Prior to his cabinet post, he was director of the Lawrence Berkeley National Laboratory, where he pursued alternative and renewable energy technologies, and professor of physics and applied physics at Stanford University, where he helped launch Bio-X, a multi-disciplinary institute combining the physical and biological sciences with medicine and engineering. Previously he was head of the Quantum Electronics Research Department at AT&T Bell Laboratories.