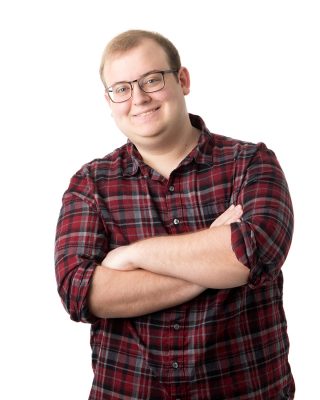 Max Haugh-Ewald ʼ19 came to Cornell undecided on a major, hoping the block plan would help him uncover what he wanted as a career through experiential opportunities.

“I thought that the block plan would help me get a better idea of what it would be like to have a career in one subject or another,” he said. “I chose Cornell because I was interested in taking classes on the block plan.”

Although open to the possibilities, a few defining influencers grew his curiosity and interest, including his mom and dad, an elementary school class, and his First-Year Seminar at Cornell. Max always had an interest in art, which was no doubt encouraged by his dad, an art teacher, and his mom, an art therapist.

“Art has always been a big part of my life,” Max said.

And his interest grew and evolved.

“I got really passionate about art, and ceramics in particular, and decided to pursue it as a career.”

But he didn’t stop there. You see, Max is a double major in studio art and philosophy. It turns out, Max took a weekly philosophy course in elementary school that was one of his favorites.

“I have always enjoyed it,” he said. “I came in [to Cornell] pretty undecided and I ended up taking an intro philosophy course as my First-Year Seminar which was incredible. It made me want to take more philosophy classes and before I knew it I had gotten a minor and then a major.”

As a double major, Max had two senior capstone projects to complete. For philosophy, he wrote and edited a long research paper in which he developed an original critique of another’s philosophical musings.

“I gained a ton of experience in writing and editing for research,” he said.

Max considers his studio art capstone project in ceramics one of his biggest achievements while at Cornell.

“I feel like I have made massive progress in my art and have really improved as an artist,” he said. “It has helped me gain some measure of confidence for my success after college.”

“The studio art capstone has really made it clear what it means to be a practicing artist and what the next few years will look like for me as I work in post-bac programs and residencies,” Max said.

”It has helped me solidify what I want to make as an artist and has shored up technical skills that I will need in the future,” he said.

Max has met with some challenges while at Cornell, in particular when he had to bein the spotlight, leading a discussion or giving a large presentation.

“I have always felt a lot of anxiety over social situations I am uncomfortable in and in being in the spotlight, but I feel that Cornell, as a whole, has been great for me in this department,” he said. “One of the best things that improved my public speaking skills was my work-study job as a tour guide and the club leadership position I have in the Chess & Games Club (vice president). I now feel much more confident about my public speaking skills.”

In the next few years, Max intends to build up his body of artwork to strengthen his grad school applications for an MFA degree.

“I intend to use these years to gain experience and mature as an artist,” Max said. “After grad school, I intend to teach at a college.”

“My favorite spot on campus is the ceramics studio in the basement of McWethy. I like that it is a kind of isolated part of campus that only art students will ever really go to (I had a friend ask me where McWethy was and they are a senior), but it is still a lively space. During ceramics courses, everyone is clearly focused on their own work, but there is still conversation. But the fantastic thing is that you can completely zone out with headphones in and no one will mind. It is both a social space and a place where you can just concentrate on what you are working on. I also think that it is great that there is an empty old pool right below the space.”

“The Chess & Games Club has had the largest impact on my life. I have met some of my best friends through C&G and done some of the funniest, goofiest things in that club. I get to spend time with people I think are great, doing something I enjoy. Additionally, it has been a place where I have really gained confidence in leading a group and public speaking. As vice president of the club, I am responsible for running many events on campus as well as leading and planning meetings when the president is unavailable (off-campus). Overall I think it has had a massive, positive impact on my life.”