The Cornell community can look forward to seeing a couple of new informative projects coming to life on campus early next school year, thanks to work by Sustained Dialogue.

Sustained Dialogue is a national organization that has a local, student-organized chapter at Cornell College. The group, which also encourages participation from faculty and staff, focuses on creating a culture of dialogue and communication to help people relate to one another.

“The goal of Sustained Dialogue is really to create more empathy for people that have identities that are different from yours and to approach these differences in a way that is respectful and that builds trust among those perceived differences,” said Civic Engagement’s Hannah Ganzel, who is the advisor for the group.

The Sustained Dialogue groups meet twice a block, and they work to create an action plan with the goal of creating positive change on campus.

As part of the action plans, one of the groups decided to create a new block calendar. Students will see that large calendar on the bulletin board outside of the Hilltop Café starting next school year. Jakob Orel ’22 says this project can help engage social groups.

“We decided to create the block calendar because many of our dialogues focused on topics about engagement on campus and in the Cornell community,” Orel said. “We talked about many different divides and reasons for poor engagement among athletes, Greek groups, faculty and staff, musical ensembles, and many others. For our action plan, we decided that we would try to get more people involved by making it easier for students to see all different types of events that are happening throughout the block.”

Cornellians will also see laminated information sheets on campus that will explain the process of reporting an incident or concern on campus, which is another Sustained Dialogue action plan project.

“The intention is to get preliminary information out there for students to see and understand,” Ganzel said. “It will provide support for those reporting an incident about safety concerns or crime. What is the process you’ll go through? What are your rights through that process? Who do you turn to?”

Olivia Knowles ’20, co-president of Sustained Dialogue, says they’ll be posted in bathrooms across campus. She says she wants students to know their rights and to know about the process that happens after a report is submitted. They will also include resources on and off campus for students who are looking for cultural or mental health support. Knowles has enjoyed spending time with her Sustained Dialogue group.

“Cornell College is a great school, but with all schools, there are issues across campus,” Knowles said. “No one knows these issues as well as students. Getting students together to share experiences helps us all have a better idea of where students are struggling that we might not personally see. I really believe that we can make Cornell a much better school and campus if we come together to create relationships and change based on real students and faculty needs.”

The 2019-20 school year marks the fourth year for Sustained Dialogue at Cornell College, and Ganzel says the action plans, projects, and overall goals of the organization are important to building community and creating a peaceful place for everyone. 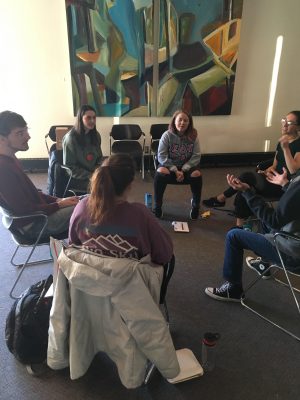 “We are trying to lean into difference rather than away from it,” Ganzel explained. “We’re always asking, is there something that we can change or we can pin down and then take action to make change?”

Mia Farinas ’20, the outreach chair of Sustained Dialogue, says she loves the campus chapter because it focuses on learning ways to understand others and have productive conversations about difficult topics.

“This is an important tool in such a politically polarized time and also for us as students as it teaches us to push ourselves to develop empathy and understand perspectives different from our own,” Farinas said. “I hope that by developing dialogue skills, we can become a more empathetic and open-minded community for each other at Cornell.”

Sustained Dialogue will welcome a member from the national headquarters to lead a moderator training session, which will provide skills for conflict resolution and facilitating tough dialogue for those looking to participate in the campus chapter. Cornell Staff, students, and faculty are invited to attend and can sign up by emailing sustaineddialogue@cornellcollege.edu. It will be held during the first block break of the year, Sept. 19 and 20, from 8 a.m. to 5 p.m. on both days.